Crappie are some of the most popular fish to catch—and, as one of the largest varieties of panfish out there, they’re also extremely popular for eating. There are two primary species of crappie: white and black.

In this guide, learn the key differences and similarities of white crappie vs black crappie, as well as ways to identify each species, the answers to frequently asked questions, and fishing tips for landing more crappie than ever before.

White crappies are freshwater fish belonging to the Centrarchidae family, which also includes other sunfish such as black bass, rock bass, and Sacramento perch. In fact, a common nickname for the white crappie among some anglers is “silver perch.”

Although white crappies look extremely similar to black crappies with regards to size and shape, there are notable differences between them. The most obvious of these lies in its coloring.

White crappies are silver with white bellies and can have green or brown at their backs. You'll notice anywhere between five and ten dark bars on a white crappie's body, running vertically, and some dark lateral markings on its sides.

While both species grow to an average weight of about half a pound, white crappies tend to have longer bodies—typically between 10 and 15 inches. They also live longer on average, so you might catch heavier white crappies than black crappies due to advanced age.

Black crappies belong to the same family and genus as white crappies. They also live in freshwater locations and can grow to similar weights or even lengths. However, black crappies tend to be smaller, between 4 and 10 inches on average.

Like white crappie, coloring is the best identifier when you catch a black crappie. You’ll notice dark, irregular spots on its body. By contrast, the markings on a white crappie will be more like bars or stripes, and much more uniform. As for body color, black crappies are often silver or green.

Both species have large mouths that extend past the eye, with small, double-rowed teeth. This is due to the fact both are piscivores—fish that eat other fish.

Because the general shape and features are so alike between the crappie species, anglers should look at the fish's colors and dorsal fins to best tell the two apart.

Note that some areas can have what anglers call "pale black crappies," which, based on coloring alone, would be mistaken for white crappies. Checking the spines in the dorsal fin can help you confirm your guess. 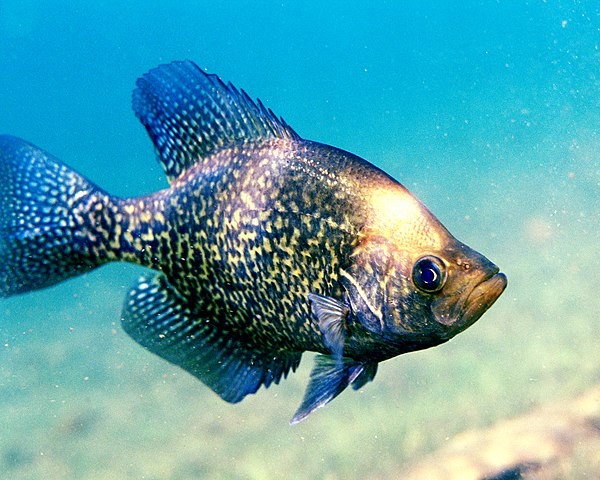 Both white and black crappies make their homes in freshwater with little movement. White crappies will tolerate murky water, also known as turbidity, better than black crappies, though you can find white crappies in clear water as well. Black crappies prefer lots of vegetation, whereas white crappies can be found in open water or shallows, depending on the area, season, and time of day.

Spawning season for these species varies by location. Springtime is a good rule of thumb for many states, but areas in the southern United States might see earlier spawning seasons—late winter—than northern areas. Very cold water might keep crappies from spawning until early summer.

Like many types of fish, crappies build nests for their spawn. Black crappies opt for spots with lots of vegetation and coverage, while white crappies venture into rocks or brush in shallower water. Males of both species guard their nests until the eggs hatch.

The known native range of white crappies is vast compared to many other kinds of fish, spanning the Great Lakes, Hudson Bay, and Mississippi River basins across the United States. The species has also been widely introduced and now can be fished in freshwater bodies all over the U.S.

Black crappies are just as widely distributed and extend even farther (down to Mexican and Panamanian waters), but it's unknown where, exactly, their native range began or ended. It's theorized that the black crappie began in similar places as the white species, however.

When fishing for white or black crappies, consider brushy areas, ledges, concrete (like dams), docks, fallen trees, and anywhere that would provide coverage or warmth in the chillier pre-spawn season. If spawning season is particularly close, you’ll find crappies schooled up near creek mouths.

For other times of the year, you can find white crappies in shallows or open waters and black crappies near vegetation and cover.

When To Fish For Crappie (Best Time & Season To Catch Them)

The best time of day to fish for crappie is in low-light conditions when the water has cooled down (if fishing in the spring or summer in most areas).

Dusk, dawn, and overnight—especially between midnight and 2 a.m.—can land tons of crappies in very little time. This is when crappies are the most active and will eagerly feed.

As for the best time of year to catch crappies, it varies too much by region to say for sure. Because these fish are found all over the contiguous United States, the spawning season can occur as early as February or as late as summer. Most areas see crappies spawn in early March through late May. This is when the water typically begins to warm up.

Of course, the pre-spawn season isn't the only time to fish for crappies. You can catch black or white crappies virtually all year long in many states.

Both white and black crappies are easy to catch and great for beginners, children, or experienced anglers who want a great meal. Because crappies rarely exceed a pound in weight, they’re not very strong and won’t put up a tough fight when you reel them in.

The hardest part about catching crappies is learning where to find them. Trolling is a popular fishing method, as is normal angling with a pole. For black crappies, remember to cast or troll near cover and vegetation.

When it comes to catching white crappies, try open waters in the early mornings or late evenings. If you’re casting midday, try shallow areas near structures like docks or bridges.

Crappies in general have a mild flavor most people enjoy greatly, although others say it’s a bit too mild: almost bland, in fact. Fortunately, a number of preparation methods and recipes can transform its flavor, so its mildness doesn’t matter to many anglers.

The meat of white and black crappies is soft and tastes excellent battered and fried, sautéed, or even baked. Deep frying is one of the most popular methods of cooking crappie, possibly because its mild taste lends itself well to the richness of the oils and batter. For a healthier option, try crappie fillets baked with a butter-herb sauce.

Crappies, whether white or black, are very nutritious and can be a smart option for any diet. A small three-ounce portion delivers just over 100 calories and more than 20 grams of protein in most cases.

Although crappies aren’t as high in Omega 3’s as other fish, like salmon, they do provide a beneficial amount per serving. 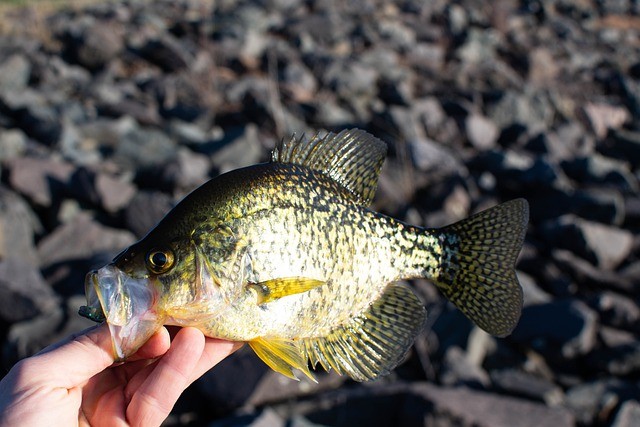 What is the lifespan of a crappie?

The oldest known age of a black crappie is 15 years, but most will live to be 7 years on average if they aren’t caught (most black crappies are caught between 2 and 5 years of age). White crappies have an average lifespan of 3 to 6 years.

What is a good size crappie? Does a white or black crappie get bigger?

Crappie don’t get particularly big. In fact, the current world record is for a white crappie that weighed just over 5 pounds. Most white crappies you’ll catch will weigh 1/2 to 2 pounds, which tends to be bigger than the majority of black crappies caught (1/2 to 1 pound). Additionally, white crappies reach longer lengths than black crappies.

Do white and black crappie crossbreed?

Yes, white crappies and black crappies can be hybridized, resulting in offspring known as the aptly-named (and easily remembered) Hybrid crappie. They’ll usually sport a black stripe on their nose, although natural crappies can have this as well.

Can you catch crappies with worms?

While crappies have been known to eat worms, nightcrawlers, and other insects, remember that these fish are piscivorous. In other words, they prefer eating smaller fish. This means that live bait like minnows or yellow perch will be much more effective than worms.

Both white and black crappies are widely fished for sport and food. Similar in size and body shape, distinct coloration is one of the best ways to tell these species apart, followed by the number of spines in the dorsal fin.

Whichever you catch, crappies can provide a fun target for anglers of any skill level and a delicious meal for palates of all preferences.