As one of the most sought-after fish for novice and experienced anglers, bass provide exciting sport and delicious taste. However, sometimes identifying just which kind of bass you’ve caught can be difficult.

Learning some distinguishing factors will help you know whether you’ve caught a white bass vs striped bass, or another species entirely.

In this guide, learn the key differences between these species, ways to identify each, comparisons on taste, and how to catch more white and striped bass.

What Is a White Bass?

The white bass, sometimes called a sand bass or silver bass, is a member of the Moronidae family. Fish in this family are also called temperate basses.

White bass can be a silverfish-white color but can also appear pale green on the bellies and sides. Often, they have dark stripes running horizontally on their sides, along with a dark gray or green back and dark fins. Like many basses, it has a deep body.

Most white bass reach lengths of 10 to 12 inches and weigh between half a pound and 2 pounds, but some can grow larger. 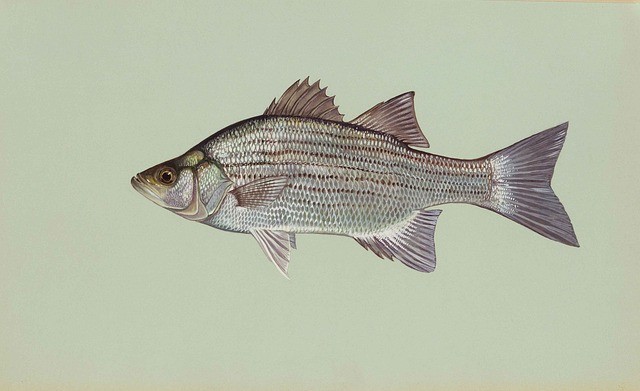 What Is a Striped Bass?

The striped bass belongs to the same family as the white bass, along with species like the white perch and yellow bass. Other common names include striper or rockfish.

Size is the easiest way to tell a striped bass from a white bass. White bass rarely weigh more than 2 pounds, while striped bass can commonly weigh anywhere between 5 and 40 pounds. It can reach lengths of 20 inches, up to 35.

Like the white bass, striped bass have lateral stripes and a silver-colored body, but these markings are usually fainter on white bass—and only one stripe goes all the way to the tail fin, whereas many of the stripes on a striped bass reach its tail. Striped bass have a narrower, sleeker shape compared to white bass.

Both of these hybrid bass varieties are able to withstand warmer temperatures than a pure striped bass, allowing for greater distribution. You can tell a hybrid striped bass (also known as a “wiper” or Whiterock) from a regular striped bass by observing its general shape and head. 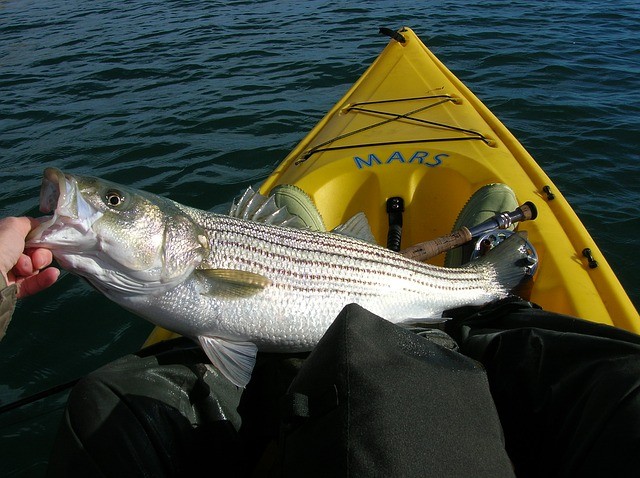 Since they belong to the same family, it’s no surprise white bass and striped bass will behave similarly—but there are differences in their habitat preferences, the best ways to catch them, and how they taste.

Both white and striped bass are freshwater fish at birth through maturity, and populate rivers and lakes. The white bass, which can withstand a wider range of temperatures than the striped bass, is found all over the U.S. via natural and stocking distribution. It remains in freshwater sources during adulthood.

By contrast, the striped bass is usually more plentiful in cooler waters, and can be found in saltwater areas after reaching maturity. It’s anadromous, meaning it ventures into oceans during adulthood and returns to the freshwater body where it was born in order to spawn.

Striped bass spawn in the springtime, sometimes multiple times each year or skipping years. White bass spawn earlier, around late winter or early spring. They do not migrate to specific nesting sites or build nests at all, for that matter; they simply find suitable shallow areas in lakes or reservoirs to lay and fertilize eggs, then return to deeper waters.

Perhaps the best fishing tip to catch bass is simply knowing where to find them. Though abundant in many areas, bass are migratory, so timing your fishing trip to where they’ll be is critical.

In the U.S., you can find striped bass all along either coast. When spawning season is underway, these fish will be heading for (or already in) freshwater tributaries, returning to their birthplace to lay or fertilize eggs.

In springtime—when spawning season typically occurs—head inland along connecting rivers for the best chance at catching them. Keep in mind that some freshwater-only striped bass also exist in areas where migration to the ocean is blocked.

White bass can be found in the Hudson Bay, the St. Lawrence River, the Great Lakes, and other reservoirs and freshwater lakes across the United States. You can also find them in Canada, such as the Manitoba or Red River.

If you're fishing farther south, the Mississippi River Basin all the way down to the Rio Grande hosts white bass in abundance.

Best Season To Catch Them

Though you can catch white or striped bass year-round, some seasons are easier than others. White bass spawn in late winter and early spring, then school up in deeper, cooler waters through the summer.

Autumn is similar, until the weather starts to cool—then you’ll want to cast near structures, deep down where schools of white bass are likely to congregate.

For striped bass, follow migration patterns: they’ll likely be in pre-spawn season in early spring or late winter, then in freshwater tributaries during the height of spring. In summer, especially when the water gets very warm, you’ll find them schooled up very deep in the ocean—up to 60 feet below the surface.

Fall is a great time to fish for striped bass if you prefer topwater fishing over trolling the deep waters or right after a storm when the water is cool. This is actually an ideal time to fish for any bass, along with dusk and just before dawn, when bass are more active and feeding.

White bass are easier to catch than striped bass, partially due to their smaller size.

They also move less, usually staying in the same freshwater area or connecting waterways. Striped bass are harder to catch, and not just because of their size: they don’t behave as predictably as other types of fish.

Many anglers recommend casting out for stripers when the water is around 50 to 70°F, ideally in seasons when they’re schooled up and not yet migrating for spawning season. Live bait is preferred, such as clams or mackerel.

For beginner anglers, white bass might be the easier catch overall. They school up earlier, move less, and behave more predictably than stripers. On the other hand, they’re not quite as rewarding to land!

White bass tastes slightly fishy, depending on the preparation method. Soaking in a saltwater brine can help eliminate this strong flavor, along with removing the red meat, so only the white meat remains. Frying is arguably the most popular method for cooking white bass, perhaps because it helps neutralize or cover the fish flavor.

Striped bass, which are larger and spend most of their adulthood in saltwater, are regarded as the better-tasting fish of the two. It has a rich, buttery flavor free of that fishiness found in white bass, and is flakier as well. It can be grilled, baked, fried, and smoked. 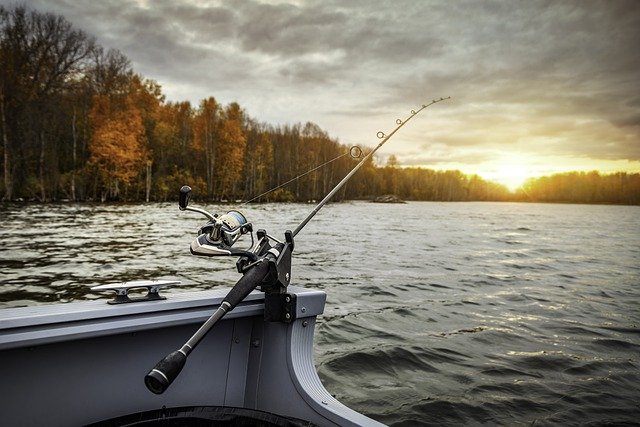 What is the biggest white bass ever caught?

The largest white bass ever caught measured 18.5 inches in length and weighed over 4 pounds. It was caught in Devil’s Lake in Baraboo, Wisconsin.

Do white bass bite when it is cold?

Yes, white bass still bite when it’s cold out—though locating them might be a challenge. Look for structures and deeper waters where schools are more likely to gather, or areas farther up reservoirs near tributaries.

Is striped bass the same as sea bass?

No, striped bass and sea bass are not the same, although both live in saltwater areas and look similar. Black sea bass are much darker and smaller. White seabass, meanwhile, are actually a type of croaker and live along the Pacific coastline.

As saltwater predators, striped bass eat a variety of meals, including other fish and sea creatures. While they feed at any depth, it's not at all uncommon for them to find food sources along the ocean floor, ranging from crab to flounder.

Striped bass and white bass belong to the same family and share many of the same habitats at times, but these fish are different from one another in many ways. Striped bass grow much larger and migrate to saltwater in adulthood, while white bass remain in freshwater bodies and stay on the smaller side by comparison.