While some anglers swear by live bait (and with good reason), artificial lures can be just as effective at landing fish—oftentimes, even more so.

In this guide, learn the different types of fishing lures, how and when to use them, and ways to target specific kinds of fish with the perfect lure.

Fishing Lures (An Overview Of Why Fish Like Them)

Fishing lures are artificial bait, sometimes with hooks attached, that catch a fish’s attention and attract them to bite. You can also use lures when you’re fishing with a spear, though they’re typically used on fishing lines.

How did lures come to rival the real deal?  These timeless pieces of tackle actually date back to 2,000 B.C.

They were made of bronze or bone and used by ancient fishermen of China and Egypt.  In the 1700s, Scandinavian fishers invented and used spoon lures—still popular today.

By the 1800s, England was using tin minnows and rubber insects, which soon led to early iterations of spinnerbaits.  This eventually led to commercially produced lures in the United States in the early 1900s.

As a result, fishing with lures became much more mainstream. 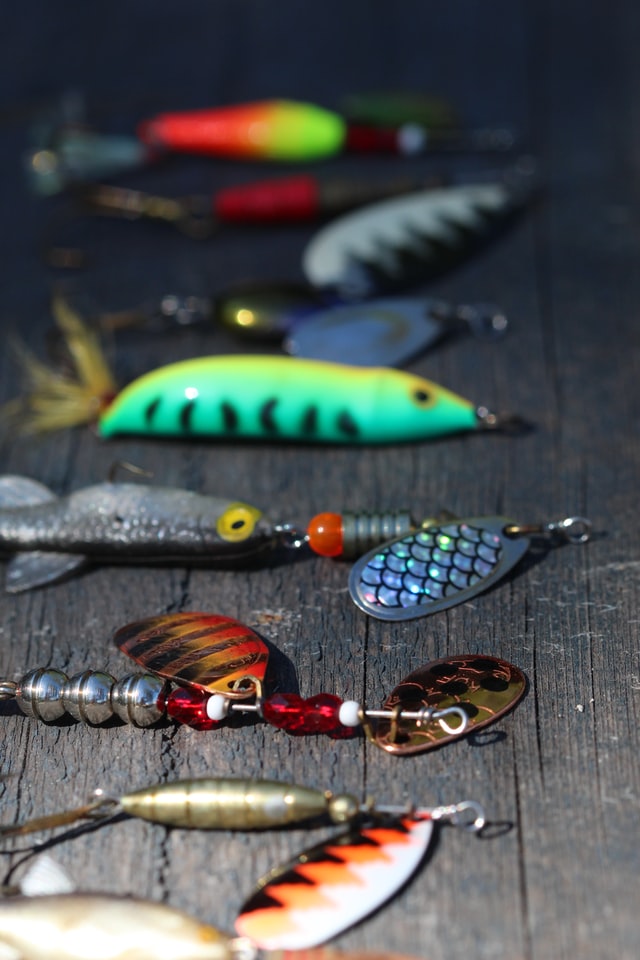 You might think fish can’t be fooled with fake food, but lures are designed precisely to mimic what fish really eat, or to trigger a defensive or offensive attack.  When a fish spots a lure in the water, they react with one of three strikes: feeding, reaction, or territorial.

Feeding strikes occur because the fish is hungry, and your lure looks like a good meal.  If the lure mimics a predator or something strange and dangerous (or just annoying), they might issue a reaction strike in an attempt to neutralize the threat.  Reaction strikes also occur when the fish thinks your lure is an easy-to-eat baitfish, like an injured minnow.

And finally, a territorial strike occurs when a fish spots a lure in the water but thinks it’s a threat to its eggs or nest. Territorial strikes, along with reaction strikes, take some skill to provoke—but they can land you much bigger catches than relying on feeding strikes alone.

If you’re new to lure fishing, choosing the right one can get confusing. Here are 12 common types of fishing lures you’ll encounter and what each is best for.

This is a varied option in terms of design but will always involve a hook, lead sinker, head, and body that helps it jerk or flutter up and down when it’s in the water, thus attracting the attention of popular predator fish. These include bass, crappie, perch, bluegill, and more.

As the name implies, a spinnerbait has metal blades that spin. This motion sends flashes of light or vibration waves to nearby fish, attracting their attention more than stationary lures. You can use spinnerbaits to catch predator fish, who are likely to assume it’s a struggling meal in the water—resulting in a reaction strike.

Similar to spinnerbaits, in-line spinners have a wire running through the middle of the blade. As a result, the entire lure spins, thus attracting a broader range of predatory fish like bass or muskies. They’re also popular when trolling due to the wide variety of sizes to target several species of fish at once.

This subset of the spinnerbait category doesn’t look similar but functions in much the same way: it moves and flashes in the water, attracting predatory fishes' attention. It’s also called an overhead arm lure due to its shape: safety-pin spinners consist of wire at 90-degree angles with a swiveling blade. The hook is usually dressed like a minnow to encourage feeding or reaction strikes.

Bluegills, perch, crappie, and other panfish love beetle spin lures, which are much smaller (perfect for attracting these often-smaller fish). Tailspinner lures sink faster and feature a spinner at the bottom, designed to be dropped straight down and quickly reeled back in.

Another appropriately-named lure, spoons are slightly concave and elongated, which allows them to move in a fashion much like spinnerbaits.  Spoons are preferred by many anglers since they’re easy to use, inexpensive, and effective in catching a wider variety of fish than more targeted lures. You can use spoons to catch bass, salmon, trout, pike, muskies, and much more.

Another lure that’s widely regarded as the best, plug lures (also called crankbaits or minnow lures) are probably what you envision when you think of fishing lures in general. They look like small fish and have hooks attached. You can use a crankbait to catch any fish that eats smaller fish: bass, perch, bluegills, crappies, and other predatory species.

Although they look a lot like crankbaits, swimbaits flutter (or “swim”) when you reel them in. You can use them in deeper waters than crankbaits, and better target certain species like rainbow trout or bass. These are great for beginners since they snag less on vegetation and provide better casting control than other lure types.

Another baitfish-mimicking lure, surface or topwater lures twitch along the water’s surface when you reel them back in. This motion imitates insects or injured baitfish, attracting predators in a feeding or reaction strike. Topwater lures are great for bass fishing, as well as catching bonefish, redfish, and others.

Particularly useful in bass fishing, soft plastic stick baits can be used to target virtually any species.  They resemble worms, which all fish (even predators) are known to consume. This is an excellent option for beginners since it’s easy to identify, versatile, and can be added to a simple hook-and-bobber rig in seconds.

These are ideal for fly fishing, hence the name. Instead of mimicking baitfish, flies look like…well, flies or other insects. They can also resemble insect eggs or larva and float or sink just below the surface to provoke a feeding strike from trout, salmon, carp, tarpon, and more.

With a jig head and skirting, as well as hinged metal that moves in the water, this lure looks and functions much like a spinner but focuses on creating stronger vibrations ("chatter") rather than flashes of light. Slowly reeling it in can result in territorial strikes from large fish, while quick reeling will cause feeding or reaction strikes—but this balance is tricky for beginners to master. You might consider chatter baits after you’ve experimented with more traditional lures and know how to work them. 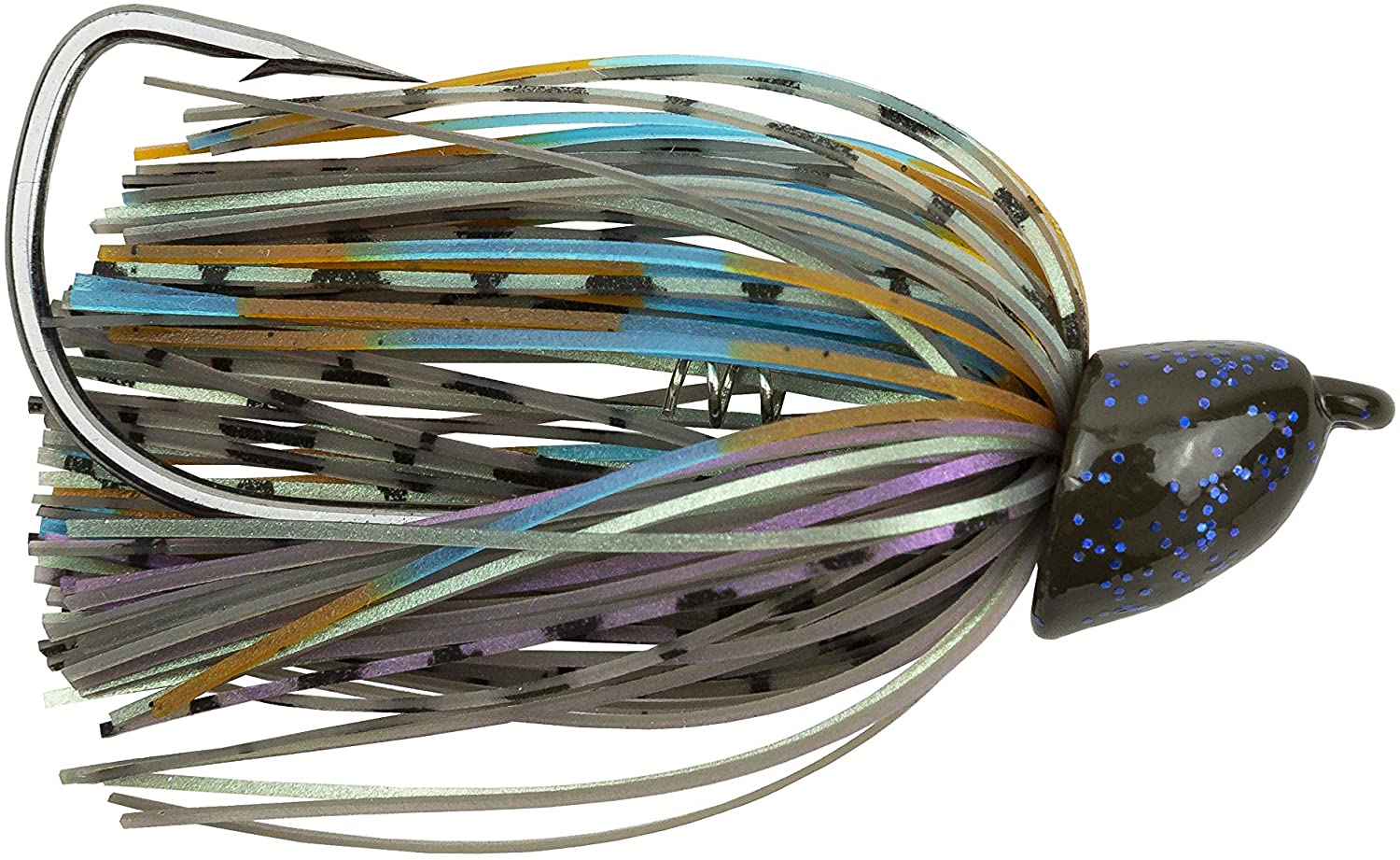 Benefits Of Using Fishing Lures Over Bait (Do They Really Work?)

In general, it’s better to fish with live bait whenever possible, simply because fish will always prefer the real thing over an artificial lure.

The scent, color, movement, and taste are all familiar to fish, so they’ll be less hesitant to strike. That said, there are plenty of advantages in using artificial fishing lures instead of live bait.

Do I need a swivel with a lure?

You don’t always need a swivel, especially if you’re just casting near the shore or in very shallow, calm waters. The main benefit of a swivel is to keep the line from twisting and tangling as the lure or bait moves, so it’s ideal to use one in fast currents, deep water, or when your lure moves a lot, such as a spinnerbait.

Do I need a sinker with a lure?

Some lures are heavy and large enough to sink without additional sinkers, but you’ll almost always have better luck with sinkers than without. These weights allow you to get your bait or lure down to the exact depths you need at the right speed to attract your target fish. What’s more, sinkers help stabilize your line so that it’s not swept up in the current.

Can you fish with lures at night?

When you go night fishing, you’ll want to consider two factors before choosing a lure: contrast and movement. Visibility is reduced at night, so getting fish to notice your lure will be trickier. Consider a dark lure with bright contrast (such as black and white) and/or one that moves a lot and causes vibrations, such as a crank or spinnerbait. Some anglers advise choosing dark ones with low or no contrast, so the fish reacts only to the movement, not the appearance.

Using artificial lures instead of bait when you fish offers convenience, cleanliness, and more precise targeting. Lures can mimic baitfish, insects, larva, or even frogs to attract fish or rely on flashing and vibrations to encourage strikes. By selecting the right lure for your target fish, you can land even bigger catches than traditional bait might allow.