Arguably the most popular target game fish worldwide, bass are a prevalent yet hard-won variety that makes angling exciting and challenging while still being accessible to anglers of all skill levels.

When trying to target spotted bass vs. largemouth species, however, it can be tough to optimize your fishing strategy for the one you’re after—even when using time-tested bass fishing tips.

In this guide, learn the similarities and differences between spotted and largemouth bass, how to effectively fish for bass, and the ideal times and places to go bass fishing.

The spotted bass belongs to the sunfish family, also known as Centrarchidae, which includes other freshwater fish such as crappies, bluegill, largemouth bass, catfish, and more. Both spotted bass and largemouth bass are types of black bass, the most popular game fish to catch in the United States.

One key characteristic of the spotted bass vs. its largemouth relative is hinted at in the latter’s name. While largemouth bass have big jaws (most notably the lower), spotted bass feature smaller mouths with mostly equally-sized upper and lower jaws.

You can also determine if your catch is a spotted bass vs. largemouth bass by examining markings on its belly. Largemouth bass have white stomachs, and spotted varieties feature spots or lines.

Spotted bass also have dorsal fins with two distinct sections that extend from the tail towards the head. Largemouth bass, on the other hand, have only one section to their dorsal fin, and it doesn’t extend towards the top of the fish.

Finally, you can identify a spotted bass vs. largemouth based on whether or not it has smaller scales over its cheek when compared to its other scales or if its tongue is rough (largemouth bass have smooth tongues).

Like the spotted bass, the largemouth is a freshwater sunfish. Its name is credited to its large jaw, with the top going up past its eyes and the bottom jutting farther out.

This is the best sign you’ve caught a largemouth bass rather than a spotted one, but there are some other distinguishing elements to look for.

As previously mentioned, the dorsal fin is very helpful in identifying largemouth bass. Whereas a spotted bass has a two-section fin that goes up its back near its head, the largemouth has only one section, closer to its tail.

Flipping your largemouth catch over can give another clue: you’ll see a white stomach with little to no markings or coloration. Spotted bass have spots or other markings that extend from the body down onto the stomach. Furthermore, all of a largemouth’s scales will be equally sized; spotted bass have smaller cheek scales. 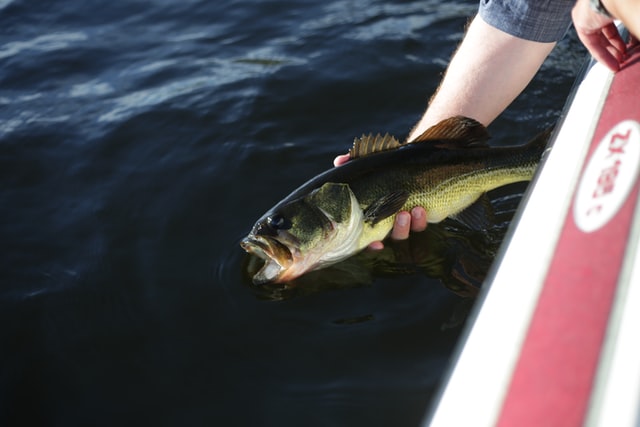 Although you can often find largemouth bass in the same places you’d find spotted bass, the reverse isn’t often true. Spotted bass prefer very clear, clean water, and you won't usually see any in natural bodies. Instead, they’re stocked in reservoirs and connecting waterways with cool but slow currents.

Meanwhile, largemouth bass like murky water in lakes or ponds and can be found in many more locations than spotted varieties. One important element to note is that largemouth bass prefer warm water. They also like places to hide: fallen logs or branches, underwater or shoreline vegetation, and docks or other structures.

Largemouth spawn in early spring when the waters start to warm up. By contrast, spotted bass spawn in colder waters, although depending on your location, this may or may not be earlier than when the largemouth spawn.

To increase your chances of catching a largemouth or spotted bass, check out the top hotspots to find these gamefish.

Best Season To Catch Them

The best time of year to catch bass is spring in many climates, but any season when the water is warmer (between 60 and 80°F) is ideal.

If you prefer winter bass fishing, try to hit the water during the pre-spawn window in the late fall, before the water gets too cold. It’s very difficult to lure out any bass (especially spotted) when the water chills or right after they’ve finished spawning.

Largemouth bass, since they aren’t as picky about water temps and clarity, will be easier to target overall. Because bass like low visibility, you’ll have to target spotted fish when the sun rises or goes down or during overcast days. Largemouth bass always have lower visibility in general, given their murky habitats.

With that in mind, it will be easier to catch largemouths during overcast or stormy days, too.  Both varieties are most active in the early morning or early evening, especially in springtime. 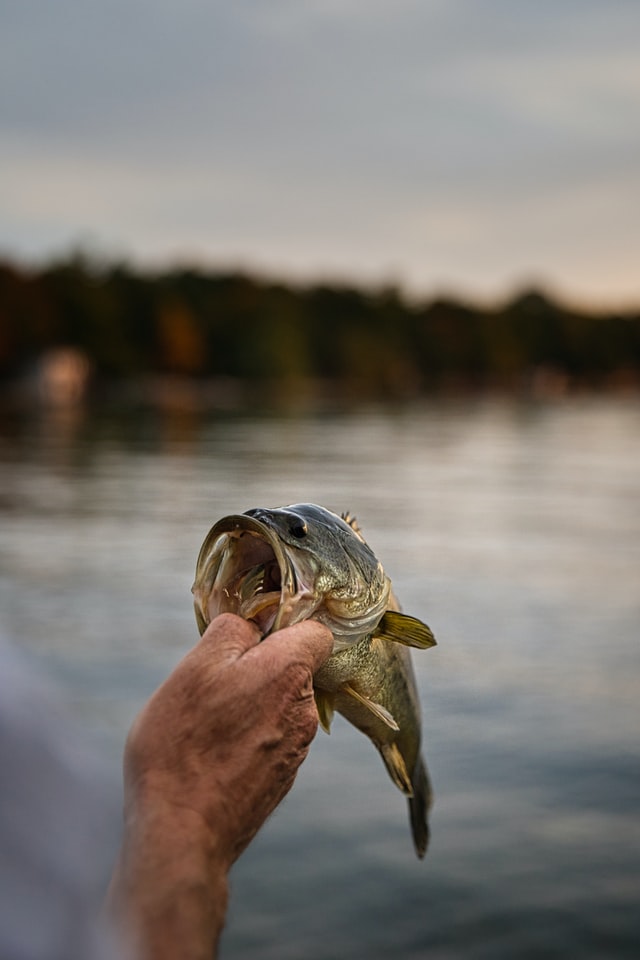 Ease of Landing Them

Overall, largemouth are easier to catch because they’re more abundant.  They’re also quite active once they're feeding and don't mind venturing into shallow or warmer waters.

Spotted bass, however, might prove easier to catch in cold or deep waters when largemouth are busy conserving their energy. They avoid vegetation and covered areas that largemouths love, so in some respects fishing for them is easier if you’re new.

Alternatively, that heightened visibility (remember that spotted bass prefer clear water) can be challenging for new anglers, too. You often have to time your casts to active feeding times and provoke quick strikes.

No matter which one you’re targeting, you can set yourself up for success by getting the right gear for bass fishing:

The best artificial lures are walking lures or soft plastic worms and grubs for spotted bass, while soft plastic worms, jigs, or spinnerbaits will work great for largemouth bass. When it comes to live bait, opt for crawfish, minnows, or shad for either type of bass, as both are carnivorous.

Both spotted bass and largemouth bass have a firm bite and slightly fishy taste. The general consensus seems to be that spotted bass offer the mildest flavor. For this reason, they tend to be preferred by most—although plenty of people love the taste of largemouth, especially those caught farther north.

One theory as to why spotted bass taste better is their preferred habitat. Cold, clean water produces a cleaner, less fishy taste. Largemouth bass don’t mind warmer temps and shallower waters and are found in many more locations beyond reservoirs and streams. However, both can be delicious and healthy if caught in a non-polluted location, cleaned and prepped well, and cooked properly.

Frying is a popular cooking method for fish in general, but might go over exceptionally well when it comes to largemouth bass. Due to its fishy flavor, not everyone will enjoy it; frying disguises this well. What’s more, both spotted and largemouth bass fry up beautifully thanks to their firm white meat—it won’t fall apart or get mushy like some fish do.

How big does a spotted bass & largemouth bass get?

Although you can find spotted bass nearly two feet long and weighing 10 to 11 pounds, most spotted bass will measure about a foot in length and weigh 4 to 5 pounds. Largemouth grow to 15 inches or more and weigh up to 12 pounds, on average.

What is the biggest spotted bass ever caught?

Currently, the world record for the largest spotted bass is held by Nick Dulleck, whose catch measured 24 and 1/4” long and weighed 11 pounds, 4 ounces. It was caught in New Bullards Bar Reservoir in California in 2017.

It’s very difficult to correctly age bass, given the variables in habitat, feeding, and other factors. However, for largemouth bass, a 4-pounder will generally be 3 to 5 years old.

Do largemouth bass bite at night?

Actually, most bass varieties will feed at night, so casting after sundown can yield great results. Keep in mind, though, that they will need at least a little bit of light to see your bait or lure. Try to hit the water during nights when the moon is full and bright. This is an especially great time of day to fish during the summer months when daylight hours might be too hot for bass to venture out of hiding.

Although spotted bass will spawn in cooler water than largemouth, this doesn’t necessarily affect the time of year in which they spawn. Studies on bass spawning times find the temperature is only one element at play. Abundant prey is another factor, along with local population size (how much competition exists in that ecosystem).

Overall, bass spawn times vary by location. Some places offer the protection, warmth, and food sources needed for spawning earlier in the year than other locations.

Bass fishing provides a thrilling and fun sport for anglers of all skill levels. Knowing the differences between spotted and largemouth bass will help you better target the game fish you're after and identify them once they’re caught.