Even as a professional angler, it can be challenging to differentiate between a skate and a stingray at first glance. With both bearing similar physical properties, one can easily be mistaken for the other.

The skate vs stingray argument is one every angler will encounter in their lifetime. To understand the differences between both species, it is important to know what discerning features to look for.

Below, we have provided the features to help you easily differentiate a stingray from a skate.

Skates, like stingrays, are distinctive flat-bodied fishes that belong to the superorder of the ray fish family. They are cartilaginous fishes- like their cousins, sharks- with wide bodies that look like flapping wings and a tail that completes their kite-like appearance.

Skates belong to the Rajidae family and the Elasmobranchii subclass. Just like other Elasmobranchs, skates have skeletons made from cartilage instead of bones and an external covering of sharp placoid scales.

Like stingrays, skates are part of the Batoid superorder, which explains why they bear striking similarities.

Skates are bottom-dwelling creatures and can be found casting their shadows over the sea floors. This feature makes it easier for them to feed as they are ambush creatures who bury themselves motionlessly in the sand and snap up smaller unsuspecting fishes.

Coupled with the sharp spikes of varying lengths protruding from their back, hiding in the sand provides skates with protection from predators like their cousins, sharks.

Although skates have their mouth and gills positioned ventrally under their bodies, they also have spiracles above their bodies, enabling them to take in oxygenated water. In addition, they possess large pectoral fins that extend from their snouts to the base of their tails.

Skate species possess electrical organs in the form of a paired, spindle structure located in the tail. This organ is used as a means of communication.

Some skate species may possess sharp noses caused by cranial projections known as the Rostral cartilage. There are more than 150 skate fish species, and they all come in solid colors like brown or grey or as patterned fishes. Some of these species are Common Skate, Thornback Skate, Barndoor Skate, and Big Skate.

Skates can be up to 8 feet long and weigh up to 200 pounds. Although skates are edible, not all parts can be eaten. Their skin has to be disposed of, leaving only the cheeks and wings as the edible portions. 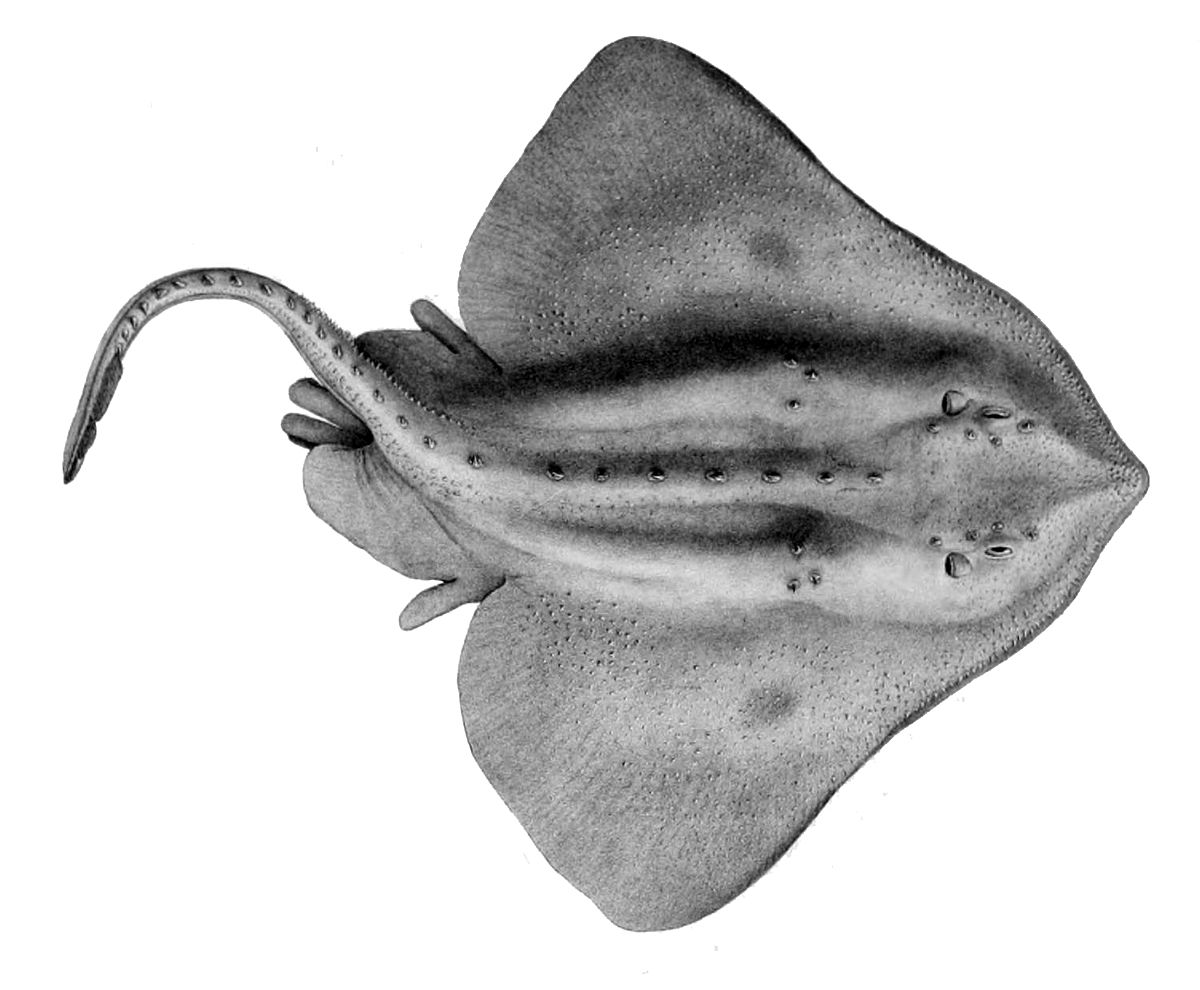 Stingrays, like skates, are flat-bodied kite-shaped fishes with a mouth and gills positioned underneath their body. They are bottom dwellers who camouflage on the ocean floor to hunt and avoid predators, absorbing oxygenated water from the spiracles on the top of their heads when they do so.

Stingrays belong to the class Chondrichthyes, order Myliobatiformes, and subclass Elasmobranchs. They are cartilaginous fishes with a skeleton made of cartilage similar to the one on the tip of a human nose.

The unique feature of a stingray is its long tail. A stingray’s tail is attached to its smooth back and acts as a stinger for defending itself against predators.

Stingrays take the ‘sting’ in their name quite literally. When threatened, a stingray will thrust its tail into its predator, releasing toxin from a serrated toxin barb and spine fragments into its enemy.

On either side of their dangerous tail, stingrays have a single lobe attached to their pelvic fin.

Stingrays are commonly found in shallow waters, coastal areas, or freshwater rivers and lakes. They are easy to spot, thanks to their pancake-like structure.

Stingrays glide gracefully in water but are often docile and easy to catch. There are around 220 stingray species organized into ten families and 29 genera. Some of these species include the Common Stingray, Ocean River Stingray, Southern Stingray, Roughtail Stingray, and Shorttail Stingray.

Forty-five of these species are, however, are considered vulnerable and endangered.

Stingrays are edible and come in various colors and patterns, with some stingrays even possessing the ability to change colors and adapt to a new habitat. 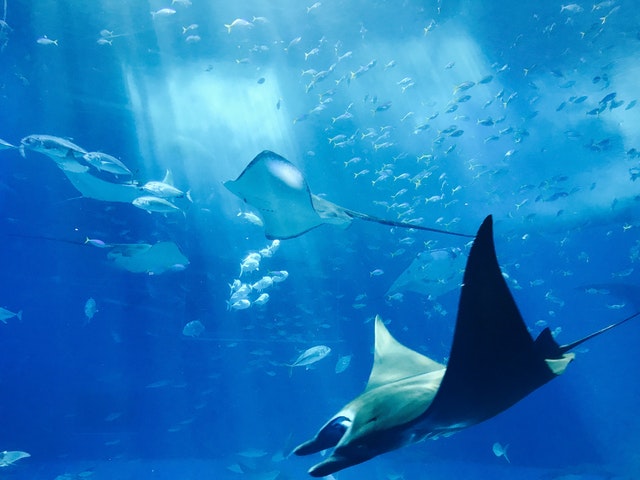 Skate Vs Stingray: What’s The Difference Between Them?

Stingrays and skates are both ray fishes with striking similarities. Both belong to the elasmobranch subclass, are cartilaginous fishes, and bear other physiological similarities.

While both stingrays and skates are aquatic animals, both fish are found in different parts of different water bodies.

Skates are lovers of the deep. They can be found in different water bodies, from tropical to near-Arctic waters. Skates are often found in all depths and can reach up to 8,900 feet below sea level.

On the other hand, Stingrays prefer the shallow parts of temperate seas. They are often partially buried in the sand, moving with the lazy current or tide and making them easy to find.

Because skates are found in most parts of the world, they can be encountered and fished anywhere. Skates can be found in shallow river deltas or in deep continental shelves.

Stingrays inhabit temperate, tropical areas and can be easily found in the Pacific or Western Atlantic.

All rays, including skates and stingrays, are usually found most easily around April to October. This usually marks the beginning of spring to the early days of fall.

Ordinarily, stingrays should be easier to get, seeing as they stay in shallower waters. However, they are far less common.

It is almost 3 times as easy to find a skate as it is to find a stingray. Hence, skates are only a little bit easier to catch.

There are various stingray conservation projects in Australia dedicated to protecting stingrays.

Although only their cheeks and wings are edible, skates and stingrays remain a delicacy in many places. They can be cooked in various ways and combined with accompaniments or sauces.

Skates have been described as having a texture and taste different from any other fish. Many people describe skates as having a smooth and succulent crab-meat texture.

Stingray is more commonly eaten in places like Malaysia and Singapore. It can be cooked in different methods and has been described as having a similar taste to skates.

Stingrays can be eaten raw, grilled, fried, or cooked using any method of choice. Its flavor has been described as one similar to lobster or scallops.

Although the reproduction method is not an easy way to distinguish skates from stingrays when you are out fishing, it remains an important feature.

Stingrays are ovoviviparous and reproduce through internal fertilization. The male impregnates the female stingray by using a modified pelvic fin as he bites the female's back. This leads to young stingrays being hatched from eggs held within the body.

Female stingrays give birth once a year and have a litter size of two to six young ones at a time.

Skates, on the other hand, are oviparous and lay eggs. Skate eggs are known as mermaids' purses and can be found on the beach sometimes. These eggs come in different shapes and sizes.

Skates have been observed to reproduce (mating and laying eggs) from winter to mid-spring; that is, from December till sometime in May.

Other features that differentiate skates from stingrays include: 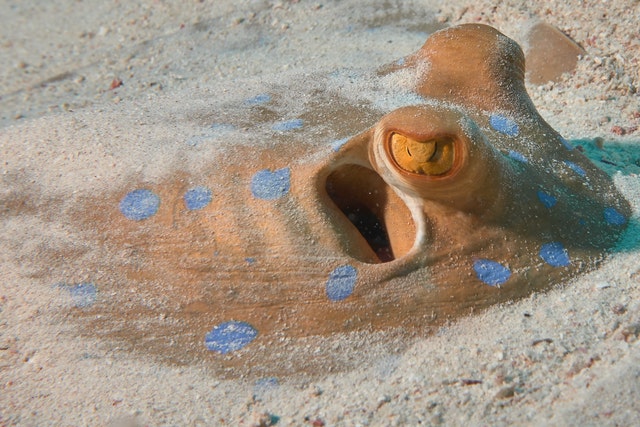 How does a manta ray differ from skates & stingrays?

Can a skate fish hurt you?

Skates do not have stingers with which they would have been able to hurt you. They do, however, have a thorn-like back, and you may need to be careful when handling them.

How long can skates stay out of water?

They can't. Skates, like sharks and other cartilaginous fish, cannot survive without oxygenated water.

Are all rays stingrays?

Stingrays are a type of ray; however, not all rays are stingrays. Butterfly Rays, Manta Rays, Guitarfish, Sawfish, and Electric Rays are other examples of rays.

How long can stingrays live?

Stingrays live about 15 - 25 years on average. Some species, however, live longer than others.

How long have stingrays and skate fish existed?

The skate fish and stingrays leave their fossils behind, making it easy for their age to be estimated.

What is an electric ray?

Electric rays are from the family of Torpedinidae and Narcinidae. Electric rays are renowned for their ability to create and discharge strong electric currents to shun off predators and catch prey. They also possess kidney-shaped organs visible through the skin, particularly around the dorsal surface of the animal.

Are skates dangerous to humans?

Skates are harmless aquatic creatures without stinging spines that are harmless. Skates can be easily held when necessary.

Stingrays possess venomous spikes along the base of the tail and are used as a self-defense mechanism against predators. Stingrays are often buried in the sand, which explains why unsuspecting beach-goers are stung in the feet. Although stingray spines are venomous, they are not lethal.

How poisonous are stingrays?

Stingrays are extremely venomous fish that defend themselves from predators using stingers that extend from their spines. If they sense human danger, they will likely sting such a person on the foot. The injuries these stings cause are usually infectious and could lead to intense pain, nausea, weakness, and fainting.  If you get stung by a stingray, ensure that you call the state emergency number and get first aid from qualified personnel while you wait.