Although they might look similar, the Redfish and Red Snapper are very different, right down to their diverse life cycles. Knowing the difference and similarities between these game fishes will help you easily discern one from the other on your fishing expeditions.

In this article, we'll be diving into the world of the two reds. We have provided everything you need to know about the similarities and differences between the Redfish and the Red Snapper.

Firstly, it is essential to understand that several fish species are commonly referred to as "Redfish." However, in this article, we are referring to the Red Drum or Spot Tail Bass found in the Atlantic Ocean from Massachusetts to Florida and in the Gulf of Mexico from Florida to northern Mexico.

This species belongs to the croaker family because they tend to make repetitive drumming or croaking noises.

Redfish are abundant in the Atlantic Ocean. They are also referred to as "roast fish" or "ocean perch" in North America. In certain parts of Norway and Europe, the Redfish is referred to as Haddock.

The Redfish of the Scorpionfish family has large eyes, a large mouth, and a lot of spines on its cheek and head. It has the ability to grow up to 25cm, which is approximately 10 inches.

The color of the Red Drum ranges from a deep blackish, coppery color to nearly silver. However, the most common color is reddish-bronze.

Redfish spawn offshore every fall. A female may lay eggs every few days, resulting in millions of offspring. They then make their way into marshes and estuaries, where they mature into the well-known spot-tailed invaders that terrorize crabs, mullets, shrimp, and other forage in water as shallow as one foot. 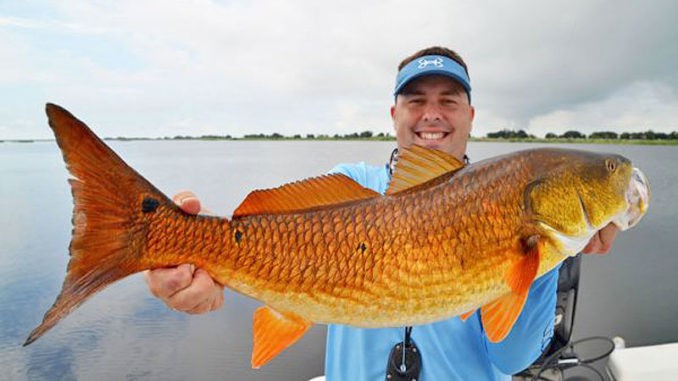 The Red Snapper, also known as the Northern Red Snapper, is found along the Gulf of Mexico and the Eastern coast of North America and Central America.

The name "Red Snapper" has been applied to more red-colored fish in the seafood industry than any other. For example, Snapper is another name for West Coast Rockfish. There is, however, only one true American Red Snapper fish with red skin and red eyes.

The Red Snapper belongs to the Lutjanidae family and naturally stays in an environment filled with reefs. It is widely sought after due to its commercial value as a game fish.

The Red Snapper is similar to different species of Snapper, such as Mutton Snapper, Lane Snapper, Mangrove Snapper, and Dog Snapper.

The Red Snapper is characterized by medium or large scales, dorsal fins, and a compressed body. Red snappers also have sharp, short, and needle-like teeth. However, they are without upper canine teeth, which are present in other types of snappers.

These fish prefer to inhabit deep reefs or rocky banks from 30 to 620 feet deep. They feed on various animals like mollusks, crustaceans, worms, and plankton.

Snappers begin spawning when they are 2 to 3 years old and measure 12 to 13 inches in length. A single female can lay millions of eggs in multiple batches. Larvae float for a few weeks before settling to the bottom and orienting themselves to a hard structure.

Red snappers are harvested frequently and are usually caught for sport, and are considered severely overfished by the federal government. During a brief season in federal Gulf waters, recreational anglers may only keep two red snappers per day, each exceeding 16 inches. 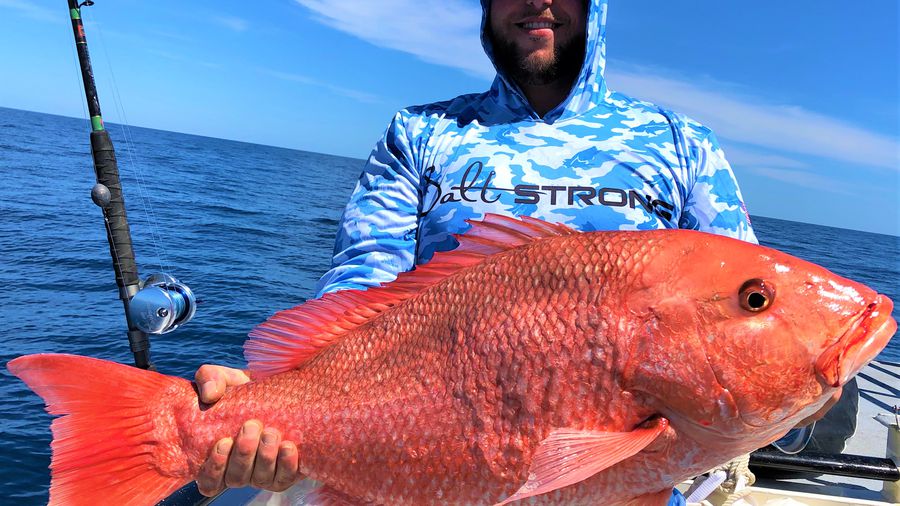 Redfish Vs Red Snapper Differences: Which Is Better To Catch & Eat?

Although they sound similar and are often mistaken for each other, the Redfish and Red Snapper are two distinct fishes. One way of spotting them is the dark spot at the tail region of the Redfish and the characteristic Red eyes and red skin in the Red Snapper.

Most of the Red Drum life cycle is spent in nearshore waters and estuaries. However, because they are not typically long-distance travelers, they do not stray far from their birthplaces.

Red Drums thrive in brackish water as well, making them an ideal game fish due to their year-round availability.

Red Snappers can be found in both deep and shallow water. They can be found at depths ranging from 30 to 200 feet, usually huddled by nearby protective structures. Piers, seawalls, and old wreckage are popular hotspots.

Red Drums can be found inshore and offshore waters from Massachusetts to Key West, as well as throughout the Gulf of Mexico. Redfish can easily be sourced throughout the state of Florida and can adapt well to both cold and warm water.

Red Snapper has two stocks: one in the Gulf of Mexico and one in the South Atlantic. According to the most recent stock evaluations:

The Redfish are available all year round, making them easier to spot. The fish respond well, though they can be a little more difficult to catch due to the extremely clear water, enabling them to use their eyes instead of other sensory features.

This requires you to be quiet, cast a longer distance, and experiment with lighter fluorocarbon leaders.

The Red Snapper is extremely common in the Gulf. As a result, their populations have been closely monitored, and fishing for them has proven challenging. Red Snapper season restrictions were recently relaxed by the federal government, reviving interest among anglers worldwide.

Related Article: How To Catch Redfish (Guide On How To Fish For Redfish)

In terms of the time of day, the best redfish action usually occurs around dusk, when the reds move to the tops of the shoals to feed, which is generally between 6 and 10 p.m.

Sometimes Redfish bite just before dark, and sometimes they bite after dark, and a lot of this is due to tides and currents. The tide changes are an excellent time to catch red drum fishes.

The water moves when the tide changes and a moving current is very important to the fish.

For Red Snappers, the spawning season begins in the summer. Although the dates aren't fixed as they vary from year to year due to spawning conditions, it reaches its apex in June and July.

Take note of federal and state waters, as they will have specific fishing seasons. Over 95 percent of Red Snappers caught are caught in federal waters.

Learn More About: Best Fishing Times: When Is The Best Time To Go Fishing?

Now to compare the Redfish vs. Red Snapper taste. The Redfish has a similar texture to the Red Snapper, a firm texture, and a sweet, nutty flavor that compliments everything from spicy chilies to delicate herbs.

The raw flesh color of the Red Fish will not be as white as the Black drum, but it will cook up snowy white. Redfish has moderate firm fillets which are moist, lean, and flaky. They also have a flavor with a touch of sweetness and a mild taste.

Learn More: How To Keep Fish Fresh While Fishing (Guide To Storing Fish)

Red Snapper grows at a moderate rate. The standard adult length is about 24 inches but may reach 40 inches long. 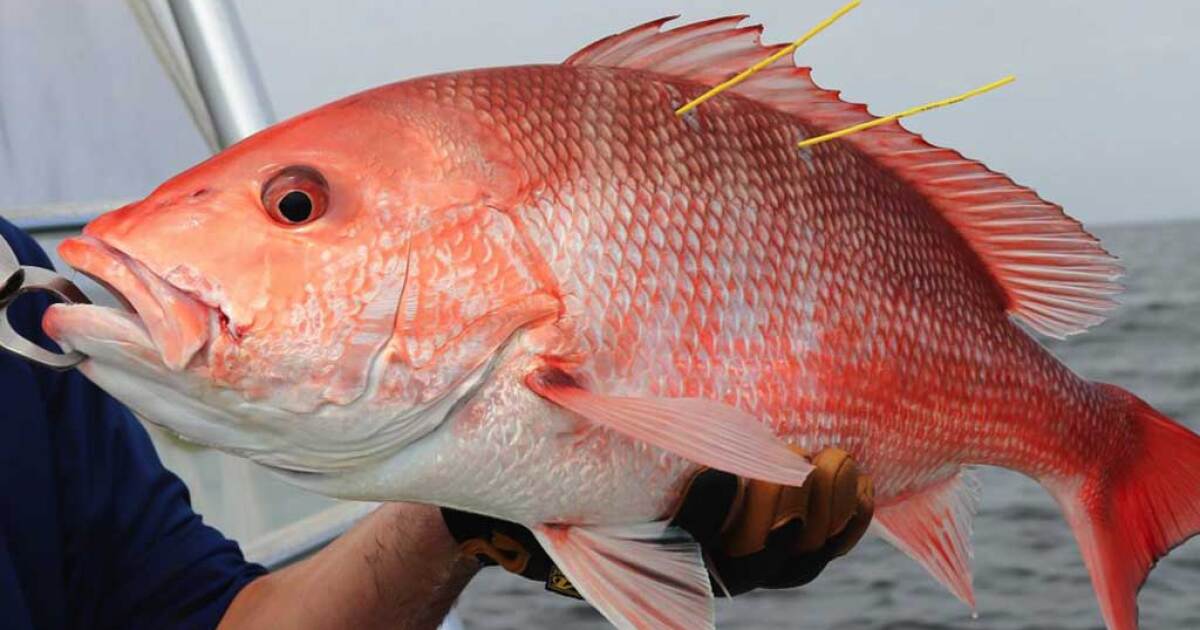 Why can't you keep Redfish over 27 inches?

The goal is to reduce the amount of pressure on spawning-size Redfish. Redfish begin spawning when they reach a size of about 26 inches. Most of them have moved offshore by the time they reach that size.

Why is Red Snapper so expensive?

This is due to its desirability and, quite obviously, the fishing restrictions put in place to bring back the population to a balanced state.

Is Redfish safe to eat?

Redfish are safe to eat. However, it must be properly cooked, as it cannot be eaten raw in delicacies such as sushi. This is because such Redfish might contain parasites.

Eating Redfish is an excellent idea. However, you must focus on Redfish less than 24 inches in length.

How do I cook a Red Snapper fish?

Red Snapper is an especially tasty fish to grill, whether whole or in fillets. While it may appear complicated, whole grilling fish is actually quite simple. Simply fill the body of a whole red snapper with lemon slices, chili peppers, butter, herbs, and spices, and you're ready to grill.

Although a hot grill might look like the better option, the fish should be cooked over low direct heat. Grilling Snappers on a wet banana leaf is popular in many parts of the world.

You could also try other fun recipes like grilling it on a cedar plank, which is another excellent method for grilling fish.

As an angler, choosing between a Red Snapper and Redfish doesn't always have to be a complicated affair. Each fish has its own peculiar trait that places it in a different group from the other, not necessarily superior or inferior to one another.

While Red Snappers and Redfish might look the same, they are separate entities with different unique characteristics. They may look the same and live in similar habitats, but they have different life cycles, and anglers who have tasted each fish will attest that they have distinctively different tastes.