Both Pickerel and Pike are fairly easy to catch and are among some of the most popular targets for anglers. However, before you head out on your next fishing adventure, it helps to know the differences between these two fish species, along with what makes them similar to one another.

There is often a great debate about Pickerel vs Pike, but both fish are great to catch for many reasons. Be sure to use this guide to find out more information on these types of fish!

So, how do you know it’s a pickerel when you catch them? The Pickerel is a member of the Pike family, which is the Esocidae family. Most of these fish are 24 inches long, with some being smaller and others being a bit larger, with the possibility of reaching up to 30 inches in length!

Unlike some fish, Pickerel aren’t heavy and will usually weigh a pound or two, making them easy to capture and remove from your fishing hook. The most common place to find Pickerel is marshy lakes and rivers, so you can expect to see them in freshwater.

The Chain Pickerel gets its name because of the pattern it has on both sides of its body. These fish have a unique, chain-like design displayed on their sides, often in a shade of yellow. The fish have yellow markings on them, with a slightly darker greenish color on the tail and top of the body.

They have a dark bar that separates each eye with yellow pupils. In addition, their snout is long and protrudes forward. These fish also have a full set of sharp teeth inside their mouths, so be careful. 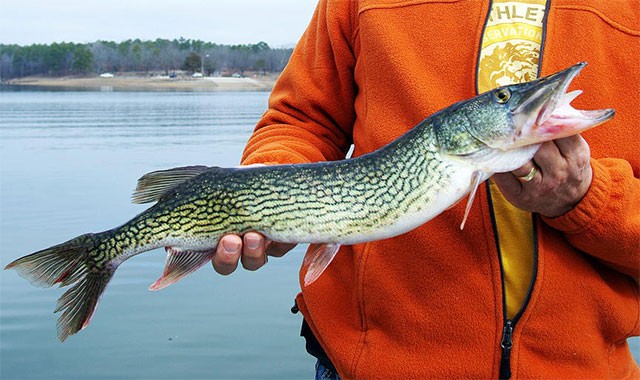 The Pike fish can be found in many areas, including Canada, Alaska, and other parts of the United States. The large, flavorful fish is a member of the Esocidae family, like the Pickerel, but there are some differences. For example, these fish tend to weigh a bit more, with the average fish weight around 2.5-3.1 pounds.

However, some have weighed much more than that. In fact, there is a world record of a Northern Pike fish that weighed a whopping total of 55 pounds, which is impressive!

The Pike fish has small scales with a significantly longer body than other fish, a snout that resembles a shovel, and many teeth. However, the teeth slant to the back of the mouth. They also have an olive green hue to them, with lighter spots around them, many of which appear to be varying shades of yellow.

However, the spots don’t look like a chain like they do on the Pickerel, which is a good way to tell them apart. The Northern Pike get their name from their appearance because it’s believed they look similar to a weapon pole known as a pike. 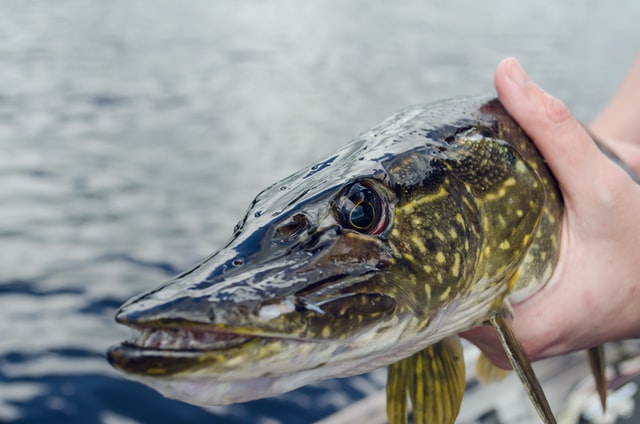 Pickerel Vs Pike (Everything You Need To Know)

The Pike fish spend most of their time in shallow lakes, ponds, and rivers. They prefer to spend time in bodies of water that are on the calmer side compared to areas with lots of waves and fast currents. These fish enjoy hiding at the back of bays, making them easier to catch when you’re in the right spot and waiting for the perfect time.

On the other hand, the Pickerel fish enjoy spending time in streams, many of which are full of weeds that help conceal them a bit better. Because they have an ambush-style when it comes to eating, you can spot them around trees, broken ships, and other random objects found in these bodies of water.

If you’re looking for Pickerel, be sure to stand by the shorelines and piers. However, if you want to find Pike fish, it’s best to stick around the bays and flats. While fishing for Pickerel, some of the best places to find the species include Texas, Florida, and even Nova Scotia.

If you’re trying to capture Pike fish on your fishing adventure, Wisconsin, Michigan, and Minnesota are three great states worth visiting for the opportunity to see what you can catch. 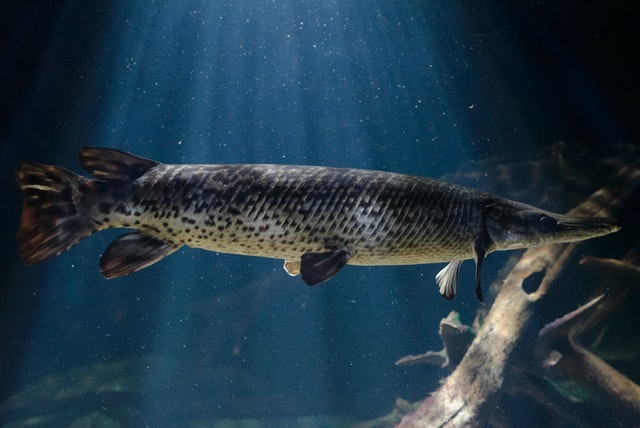 Both fish species are relatively easy to catch. However, the Pike fish is slightly more aggressive, so that is something you’ll need to consider when you’re out in the water trying to see what you can get. It’s also important to remember that both of these types of fish do have teeth. Even if you’re a beginner, you can still capture these fish when you’re out in the water at the right time.

Pike fish are often roaming around looking for fish that are smaller than them, so you can always use a lure to capture them. Lipless cranks and inline spinners are good bait to use. You can use the inline spinners for Pickerel fish, along with live shiners, which seem to be most attractive to them.

Pickerel remain active when there isn’t as much sunlight, which is why it’s better to try to catch them in the afternoon, after the sun has already at its peak. They're also often easier to catch before an approaching storm in the afternoon, so if you know a storm is coming that night, you might have better luck capturing the fish at that point.

If you’ve never tried either of these fish before, you’re probably asking, “Are pickerels healthy to eat?” The answer is YES! Both Pickerels and Pikes are good for you and are an excellent source of omega-3 fatty acids. However, Pickerel fish has a mild taste compared to Pike fish, which have more of a fishy flavor. So, if you don’t want too fishy of a meal, you can stick with Pickerel!

On the other hand, Pike has a more flaky texture, but both are good for you. Pike fish do have more bones to deal with than Pickerel. No matter which one you choose, you can fry, saute, bread, or bake and serve with rice, noodles, fish, and more.

While the Pike fish is smaller, it tends to have more bones than the Pickerel, so it’s something you’d need to consider when preparing the fish for any meals that you plan on making.

What is the difference between Pickerel, Pike & Muskie?

Muskie is a member of the Esocidae family like the other two fish. However, it has a much lighter color to it than the Pike and Pickerel fish. In addition, it doesn’t have nearly as many scales.

What is the difference between Pickerel, Pike & Walleye?

Are there Southern pikes?

Yes, much like there are Northern Pikes, there are also Southern Pikes found in the central and northern areas of Italy. You can also find them in other countries, including France and Switzerland.

Yes, Chain Pickerel can and will eat bass. However, they may prey on smaller bass that is easier for them to capture, consume, and digest than larger options in the water.

Now that you’ve learned more about the Pickerel and Pike species of fish, you can easily identify them when you capture them on your fishing adventures. Knowing the differences between the two will help you decide which type you’d prefer to capture while out in the water, especially if you’re planning to prepare the fish at home.