Mackerel are an extremely popular gamefish among experienced anglers, though novices can certainly get in on the fun too. It’s also popular as an eating fish, with an oily richness that can’t compare to most catches. The king and Spanish mackerel are two commonly fished species—and, at times, very difficult to distinguish.

In this guide, learn the differences in king mackerel vs Spanish mackerel, the best locations and times to catch them, and the answers to other frequently asked questions about these fish.

What Is A King Mackerel? (Overview & Identification)

King mackerel, also called a kingfish, belongs to the Scombridae family—along with tuna, bonito, and other species of mackerel. These fish are commonly found in temperate or tropical waters and are considered fast-swimming predatory fish overall. This description is certainly true of the king mackerel, which can swim nearly 20 feet per second.

The king mackerel is migratory and can be found in the Atlantic, along with the Gulf of Mexico. It usually weighs around 30 pounds, although record catches weigh over three times that. In terms of length, anywhere from 20 to 35 inches is common. Some can reach several feet.

You can identify a king mackerel vs. a Spanish mackerel by its yellow-brown spots on its flank, which are smaller than those found on the Spanish species. Size is also helpful, as Spanish mackerel typically don’t get quite as large. However, this isn’t always a reliable way to tell the two apart.

Kingfish may look smooth at a glance, but they actually have very small scales and a colorless dorsal fin. Its dorsal and pelvic fins actually fold out of view into a groove on its body. Spanish mackerel have a dark spot on their dorsal fin, though, and it’s much more visible.

King mackerel are usually silver along the flank and white on the belly, with an iridescent quality where the areas meet. Their backs are deep green, but not as bright as some Spanish mackerel might appear.

When checking the teeth of a king mackerel, you’ll notice they’re spaced and very pointed, which is often the case with predatory fish.

Spanish mackerel have teeth that look nearly identical, so this isn’t a very useful indication of which kind you’ve caught—rather, the dorsal fins and a notable difference in the lateral line on the body will help. While a Spanish mackerel’s lateral line slopes down, it drops dramatically on kingfish. 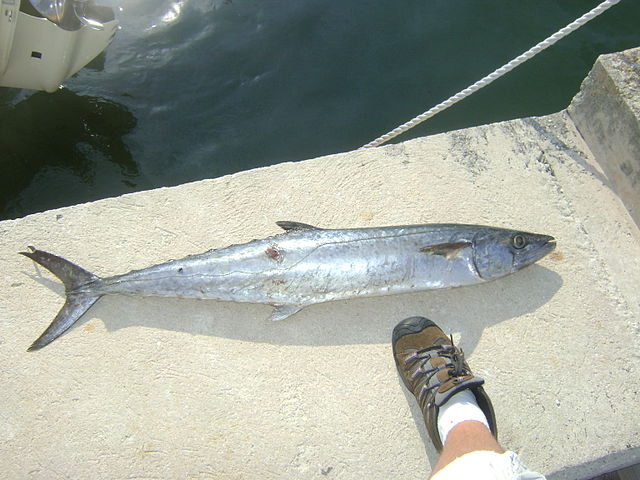 What Is A Spanish Mackerel? (Overview & Identification)

Also called a seer fish, the Spanish mackerel belongs to the same family as the king mackerel and looks virtually identical. However, there are some key differences between the two. 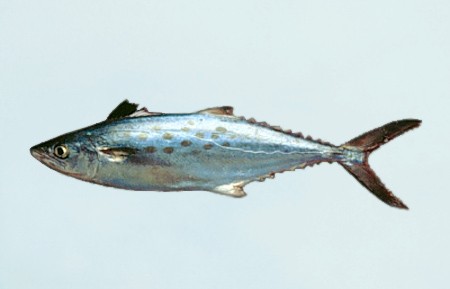 King Mackerel Vs Spanish Mackerel (Are They The Same?)

There are more differences than appearances for anglers to note when targeting king mackerel vs. Spanish mackerel. This quick guide explains these differences, with each covered in greater detail below.

Spanish mackerel prefer pelagic waters, which means they don’t venture towards the bottom (or too close to the shoreline, though they do swim in open waters nearby). They’re typically found around 80 to just over 100 feet deep.

King mackerel like warmer areas along the coast in the western Atlantic Ocean and tend to swim in schools closer to the surface than Spanish mackerel at about 30 feet down. However, they also venture into the very deep waters of the Spanish species.

Both fish migrate with the changes of the seasons, venturing north in the warm months and south in the cooler ones. Spanish mackerel spawn between April and October depending on that population's latitude, while king mackerel tend to spawn between May and September, with the latter species continuously reproducing during this time period.

2. Fishing Spots For Both

King mackerel can be found in the Atlantic from Massachusetts all the way down to Brazil. Spanish mackerel are distributed in the same areas but farther north (up to Canadian waters) and not as far south, ending with the Gulf of Mexico.

While you’ll have luck catching either species in their respective ranges, Florida is known for having a very abundant population of Spanish mackerel. Outside the U.S., you can also find them near Cuba. For king mackerel, Florida, Louisiana, and northeastern Brazil are prime fishing spots, depending on the time of year.

3. Season To Catch Them

Fortunately, you can catch both Spanish and king mackerel year-round if you follow their migratory patterns. King mackerel are closer to the coastline and beaches in hot summer months, though the “official” season is March through April, and again in October and November.

Spanish mackerel follow a similar pattern, so summer is widely regarded as the best time to fish for them, though this varies by location. If you’re fishing in Florida, for example, you'll have great luck during their fall migration when they return to those areas after northern waters start to cool down.

The best time of day to go fishing, whether for mackerel or any other game fish, is to start trolling early in the morning before or during sunrise or at dusk when the fish are actively feeding—though any time of day can yield some impressive catches.

4. Ease of Catching Them

Mackerel as a whole are considered easy enough to catch for beginners, but it’s a different story when you’re talking about specific species. King mackerel put up an impressive fight, even though locating them can sometimes be easier (due to their tendency to school near the surface).

Spanish mackerel are simpler to catch, partly because they’re not known to be too picky about their food. They still put up enough of a fight to keep things interesting, but beginners will have better luck landing one of these over a kingfish. They also weigh less (about 8 to 11 pounds on average).

5. Taste & Nutrition (Which Is Better For Eating?)

Most people prefer the taste of Spanish mackerel over that of kingfish, although both are popular for eating. One hesitation some anglers have against consuming mackerel is the risk of mercury poisoning. While this is possible due to their high mercury contents, occasional consumption (about 6 ounces a week for adults) is regarded as safe.

How big do king mackerel get?

Most king mackerel don’t exceed 3 feet in length and 30 pounds in weight, although there have been reports of king mackerel reaching lengths greater than 5 feet and weights of 100 pounds.

Yes, although it’s usually larger king mackerel that will eat Spanish mackerel. It’s a predatory carnivore and will therefore eat many fish that swim past during feeding time—including smaller king mackerel. Other parts of the kingfish’s diet include squid and shrimp.

How long does a Spanish mackerel live?

The Atlantic Spanish mackerel can live up to 12 years, although most males live about 6. Females live longer, about 10 to 11 years on average.

Can you eat Spanish mackerel raw?

Yes, you can eat Spanish mackerel raw if it is stored and prepared safely. In fact, Spanish mackerel is a common ingredient in certain kinds of sushi. However, some kinds of mackerel carry a high risk of parasites and should not be consumed raw.

Spanish and king mackerel look and behave similarly, but the former is considered the tastier fish—and the easier of the two to catch. Both provide delicious meat, however, and a wonderful day of fishing on coastal waters.