There’s a wealth of information available from fish finders, the SONAR-based electronics commonly found on kayaks and boats.

Structure, hazards, cover, and fish can all be tracked if you know how to read the display. Select the fish finder best suited for your needs here and read this review to navigate their sometimes-tricky displays. 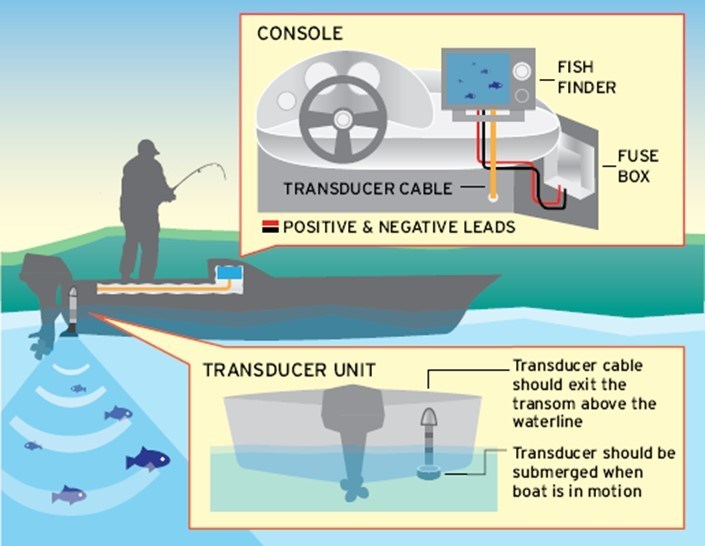 More sophisticated fish finders have colorful displays that often show multiple kinds of information at once, such as a down-view, a side-view, and a traditional SONAR. Greyscale models are much simpler and often more portable, which is why they are often preferred by kayak anglers and enthusiasts on a budget.

That being said, they are also more likely to represent fish with icons that might show movement to some degree, but won't reveal the size of the fish. For more detail and an indication of the size of the fish, a fishfinder with a colorful screen is better.

On devices that show fish arcs, the size of the fish is demonstrated by the width of the line. Curves show movement, and each vertical line is a snapshot of the water column. Crappie fish finders for example, may be smaller but are still possible to find with many devices.

Depth findings tell you how deep the water is beneath your boat. You can skip over shallow water and spend more time in the depth range your target is most likely to frequent.

Using the science behind fish finders, you can see the bottom, sunken logs and all, by scanning first with a wide beam and then running back over the same spot with a narrow beam.

How to Read a Side Imaging & Down Imaging Fish Finder

Side imaging shoots out both sides and returns an image in which a scroll of the bottom shows, from the center of the screen, the boat, then the water column, then the bottom, including things like elevation, structure, and sunken logs.

Down imaging is more common and sends its signal straight down beneath the boat. This helps you see fish arcs, vegetation, and structure vertically and in greater detail. In this case, the vertical lines are most important to read. It’s best to have both readings to get the most complete information and find exactly where the fish are.

The most effective way to employ these different modes is to do a wide sweep, marking interesting spots and targets as you go, and then returning to them later to rescan with a more narrow beam in greater detail.

How to Read a Lowrance Fish Finder

One of the mainstays of the industry, Lowrance fish finders nowadays are well-regarded for their TripleShot transducers that can show Sidescan, Downscan, and CHIRP sonar all at once.

Lowrance is also one of the easiest brands to use thanks to a recently-developed Autotune feature that automatically adjusts settings to be most effective.

How to Read a Humminbird Fish Finder Screen

The main draw for Humminbird fishfinders is their mix of detailed base maps and fantastic target separation, which is the term given to the level of detail that allows fish to stand out from other things like vegetation.

It’s also a cinch to fine-tune the display features to suit the kind of fishing you like to do. Humminbird is also one of the brands that manufacture transducers for specific environments like rivers and ice.

How to Read a Garmin Fish Finder Screen

Sophisticated cutting edge technology in Garmin fish finders give them similar target separation, SideVu, and DownVu that Humminbird and Lowrance models have at an affordable price.

Many of them also run on rechargeable batteries, which makes them versatile enough for use on smaller boats and watercraft where larger devices won’t fit, like kayaks.

Their displays are often able to display multiple different modes simultaneously, which is rare on fish finders that don’t have to plug into a boat battery.

How to Read a Simrad Fish Finder

Simrad fish finders offer cool tech like 3D structure imaging and still manage to be the affordable option for anglers on a budget. Multiple frequencies for wide and narrow scanning or improved detail on the display make them highly effective at revealing the position of schooled fish and conditions on the bottom.

Simrad frequently offers larger screen sizes in their less expensive fish finders than the other major manufacturers do, so anglers with space on their boat who want to stay on a budget typically prefer this brand.

What do fish look like on a depth finder?

Depending on the type of fish finder, fish either appear as symbols or in arcs. Less expensive models usually have symbols that won’t reveal the size of the fish, while more sophisticated ones can show the entire water column plus fish size and movement. Smaller baitfish might appear as dots or incomplete arcs while larger fish appear as thick, wide arcs.

Except for the cheapest models, fishfinder sonar bounces off fish as they move, revealing their size and location over time. Not only do these devices show fish, but they’re also great for showing depth, revealing the condition of the bottom, and sometimes even for GPS location and chart plotting.

How deep do fish finders go?

The depth of a fish finder depends on the strength of its transducer. Sonar can measure distance with sound based on its frequency and strength. Some transducers reach depths of up to hundreds of feet with reliably detailed return images for anglers to use in their pursuits.

What is a flasher fish finder used for?

Flasher fish finders are used for ice fishing and display information about the water column in 360° display rings that use green, red, and orange to tell the user how close and how large fish are. They still use sonar but concentrate entirely on information in a vertical area since ice anglers fish straight down into a hole from on top of the ice.

Do fish finders work in rivers?

Fishfinders work great for rivers, especially since the comparatively shallower depths of rivers allow transducers from brands like Humminbird to send out their sonar waves and get information in maximum detail. If you’re going fishing on a river, make sure to get a fish finder with strong side-scanning capabilities. There are also transducers from some manufacturers specifically built for river environments.

All the information on a fish finder display can be challenging to comprehend in a way that helps improve fishing. However, if you know how they work and why the displays look the way they do, fish finders are among the most effective tools anglers can have for tactical fishing.