If you’ve ever wondered if fluke and flounder are the same, fear not: many anglers aren’t quite sure. While the fluke is a kind of flounder and belongs to the same family, it is different from the type of fish most people mean when they refer to flounder.

In this guide, learn the biggest differences in fluke vs. flounder, where and how to catch these popular species, how each one tastes, and the answers to other common questions.

How To Identify A Fluke

The fluke is a member of the flatfish family, so named because of their slim shape and the fact several species have both eyes on one side of the head.  This is a mode of camouflage and allows the fish to lie flat on the seafloor to ambush prey.

Also called Summer Flounder, fluke have two distinct sides marked not just by their eyes but also by their coloring. The side with their eyes (the back) is often gray or dark brown, but can also be black with a hint of green. The belly of a fluke is called its blind side and is light or white.

When you catch a fluke, you’ll know it based on where its eyes lie. While other North American flounders are right-eyed (referring to which side its eyes migrated to), the fluke is left-eyed. 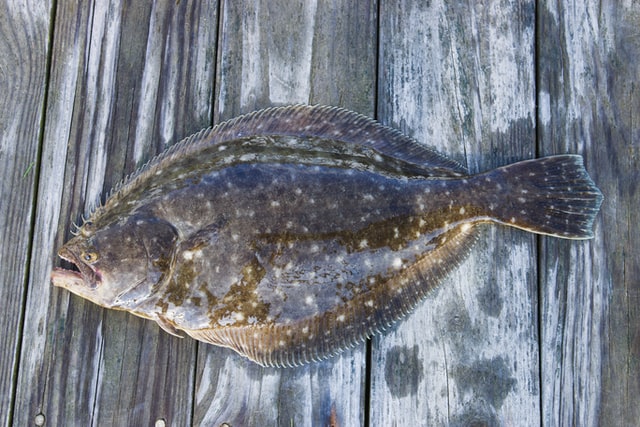 How To Identify A Flounder

When anglers talk about flounder, they’ll usually refer to the winter flounder, although several other species exist as well. Like the fluke, it’s a member of the flatfish family.

Flatfish like the fluke and flounder are actually born with eyes on both sides, but one migrates over time as they grow into juveniles. As mentioned, fluke see this migration occur to the left. Winter flounder, however, will have one eye migrate to the right.

The side your catch’s eyes occupy tells you whether you’ve got a flounder vs. a fluke. Another distinguishing factor is coloration. Summer flounder/fluke are lighter than the very dark brown of winter flounder, which are so dark they almost appear black.  In fact, winter flounder are often called black backs for this reason.

Fluke have light spots on their backs, as well, but don’t assume coloration and markings alone can indicate which you’ve caught: flounder can change colors as part of their camouflage defense. That’s why the most reliable way to tell fluke and flounder apart is by observing which side their eyes are on.

The spots on a fluke do serve a very important purpose, however: distinguishing fluke from Southern flounder, which look nearly identical, including eye direction. Southern flounder are brown with ill-defined blotches, unlike the clearly visible light spots of fluke/summer flounder. 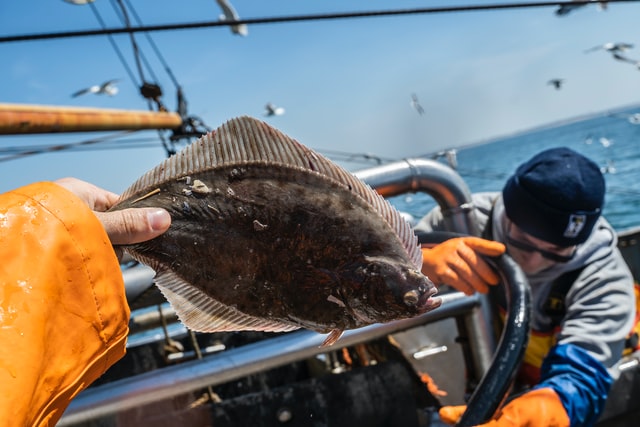 Overall, fluke and flounder are similar enough to also have very similar habitat preferences. Both are bottom-dwellers in the ocean, and utilize camouflage to catch prey.

These species hang out in nearshore areas of coastal regions, bays, and estuaries during warm months, but will move farther away from the shores into deeper waters during cold weather.

Both fluke and flounder like sand, mud, gravel, or sometimes rocky areas—and either one can change color to better hide themselves. These fish are ambush predators, which means they lie in wait for prey to swim by so they can quickly dart up and devour it.

You’ll find a great deal of winter flounder in the Delaware Bay, but these fish can be seen from Canada all the way down to North Carolina.

While you can find fluke in several places along the eastern coast of the United States, they’re more abundant in the oceans alongside North Carolina and Virginia. New Jersey and Rhode Island are great fluke fishing spots, too.

Winter flounder spawn twice a year, in both the spring and winter: February through May, and October through December. By contrast, summer flounder spawn just once, in the late autumn or early winter months.  The peak is usually in October or November.

This difference in spawning frequency might lead you to believe winter flounder would be far more common than fluke, but the reverse is actually true. While fluke are below population targets, they aren’t considered overfished. Winter flounder, though stable in many areas are currently being restocked in the mid-Atlantic region.

As its name suggests, the summer flounder (or fluke) is easier to catch in the warmer months. This is because it migrates closer to the shore during spring and summer.

Confusingly, winter flounder do the same thing—so when is the best season to fish for them?  Since they have two spawning seasons, you can catch two migratory runs during the year as they move.

High tide is the best time of day to fish for fluke and flounder if they've migrated close to the shores. In colder months (when they've moved to deep, offshore waters), early morning or early evening is best.

The hardest part about fishing for fluke or flounder is making sure your bait reaches it—and grabs its attention enough to provoke a strike. This can take practice and patience, but even beginners can land a fluke or flounder with the correct techniques. Overall, both fluke and flounder are easy to catch compared to many other species.

First, identify where your target fish will be during the season. This dictates whether you should fish from a boat or from the shore. Next, you'll want a spinning reel and rod with a ten- to thirty-pound line. Three-way swivel rigs are popular since they allow your bait to reach the bottom without dragging.

Live bait is best, and both species enjoy shrimp. Fluke will eat squid, crab, sand eels, and smaller fish—including the winter flounder.  Meanwhile, flounder are known to chow down on sandworms or clams.

Although some people think fluke and flounder taste the same, others say winter flounder is sweeter and cleaner, perhaps because it doesn’t occupy as warm waters as the fluke.

In any case, both species offer a mild flavor with little to no fishiness, which makes them very popular as eating fish. When it comes to texture, their firm yet flaky bite lends itself well to baking, frying, boiling, and more.

Lemon and butter are common seasonings since these flavors enhance the delicate taste of fluke and especially flounder.  Other great preparations include parmesan crusts (like Panko) or blackening with Cajun spices.

Nutritionally, both are incredibly high in protein, low in fat, and full of essential amino acids. Since they’re lean fish, fluke and flounder don’t deliver as much Omega-3s as other species, but they’re still very healthy options to incorporate into your diet.

Do flounders & flukes have sharp teeth?

Flounder and fluke are carnivorous, so their teeth are very sharp to quickly attack and devour prey as it passes overhead across the ocean floor.

How big does fluke get?

Fluke (also known as summer flounder) can reach 2 feet or more if they’re male, but 3 feet or more if female. Most weigh between 1 and 3 pounds, but can reach 8 to 10 pounds in certain conditions. The current world record for the largest fluke ever caught weighed over 22 pounds and was caught in 1975.

A fluke measuring 15 inches in length will be about 3 years old.

Winter flounder are capable of surviving temps as low as 28°F (the point at which seawater freezes), but they usually stick to areas between 32 and 50°F.

Fluke and flounder look and act nearly identical in many ways, but they aren’t exactly the same. You can find fluke, or summer flounder, farther south, with winter flounder being located farther north. Their tastes vary slightly, as well, and—most notably—their eyes sit on opposite sides of their bodies.

Whether you’re targeting fluke or flounder, knowing that species' migratory patterns and behavior will help you land some delicious catches, even if you’re new to angling.