Crappie and bluegill are favored among many anglers due to their abundance and how easy it is to catch them, as well as their taste.  When fishing for crappie vs. bluegill—or both—it’s worthwhile to learn the similarities and differences between these popular fish.

The Crappie fish goes by many names, including “papermouth” (due to how easily hooks can tear their mouths), speckled bass, calico bass, white perch, and several more. They belong to the sunfish family and are found in freshwater habitats.

Crappie are native to the eastern US and Canada but now can be found in all mainland states. This is largely due to intentional and natural transplantation, as well as the high spawn rate of these fish.

You can identify crappie by its shape, size, and coloring.  Most crappie will weigh only 8-16 oz.  They can have vertically running black stripes or black spots.  Another way to identify them is by checking the dorsal fin: on crappie, this fin will be soft and webbed. Black crappie have 7 to 8 spines in their dorsal fins, while white crappie have 5 to 6. 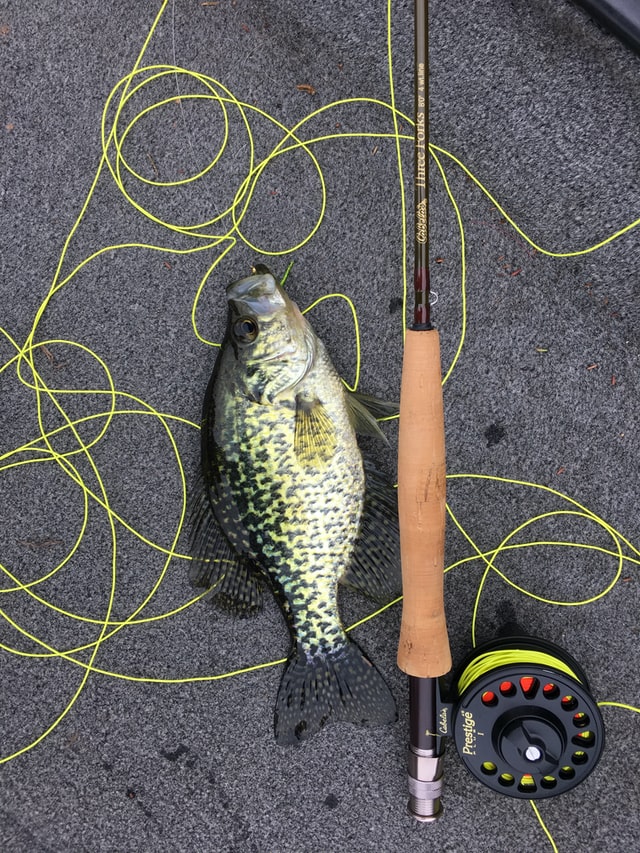 When you land a crappie for the first time, it can be tough to know that’s what you’ve caught. Familiarizing yourself with photos and markings beforehand can simplify the identification process.

Another freshwater fish that’s easy to catch, has a high spawning rate, and tastes great is the bluegill. They’re comparable in size to crappie, often weighing less than 16 oz. and measuring at just half a foot in length, although some can grow larger.

Other names for bluegill include bream, copper nose fish, or sunfish—although “sunfish” as a whole can refer to crappies, rock bass, largemouths, and several other species.  Like crappies, bluegills originated in the eastern part of America and Canada but now populate freshwater habitats all over the nation. In fact, you’d be hard-pressed to find a freshwater body that doesn’t contain bluegill.

Markings on bluegill can help identify it, along with its coloring.  You’ll notice a dark green body with darker vertical stripes or bars on both male and female bluegill fish, but a yellow belly on females and a brighter reddish shade on males (especially during spawning season, which runs from late May to August).

Bluegill are oval-shaped and, at a glance, similar to crappie in their general appearance. The coloring and markings are an important distinguishing factor to look for, however. Another notable difference in bluegill vs. crappie is the mouth size.  Crappie have distinctly larger mouths and a less rounded body shape and tend to grow larger than bluegill. Additionally, bluegill have gill covers—small blue or black flaps that look like ears.

Many new anglers will know they’ve caught a bluegill by looking for this bluegill flap first, as it's an easy-to-spot feature. In time, however, you’ll be able to differentiate bluegill from crappie by their body shape and markings with little more than a glance.

Due to higher spawning rates than other fish, as well as high adaptability overall, you can find crappie and bluegill in freshwater ponds, lakes, and calm streams or rivers all over the United States.

Crappie prefer waters at temperatures between the high fifties (Fahrenheit) and mid-seventies. Generally, 68°F to 72°F encourages the highest spawning rates (and the greatest yields for anglers).

Bluegill, meanwhile, are a little more adaptable. Their ideal water temp is anywhere between 65°F and 80°F, but you can find them while ice fishing or in waters up to 95°F. This adaptability is one of many reasons they’re so abundant year-round.

During spawning season, crappie and bluegill behave similarly: males create a nest at the bottom of the water for females to lay their eggs. After fertilization occurs, crappie guard the nest for five days until hatching begins.  Bluegill aggressively guard their nests from the start.

In warm states, bluegill spawn up to five times annually, but once is more common. Crappie usually only spawn once. Female bluegills and crappies may spawn in multiple nests during a single spawning season, however, so both fish populations remain in high abundance all year.

You can catch crappie and bluegill virtually anywhere in the United States. Freshwater bodies of water of any size harbor these fish, a factor that’s largely responsible for their popularity: oftentimes, it’s difficult not to catch them.

With that in mind, there are locations where bluegill and crappie are larger and/or more abundant. Southern states such as Alabama, Florida, Louisiana, and Mississippi see higher spawning rates and warmer waters, so they’re great for catching crappie of larger sizes or quantities. Crappie are most populous in the eastern-southern states but can be found anywhere.

These same states are ideal for bluegill fishing, but remember that bluegill tolerate a far wider range of water temperatures than crappie. So you'll find more significant numbers in coastal waters in the east—but, like crappie, you can catch a mess of bluegill in almost any freshwater body in any mainland state.

On the water, a reliable fish finder can help you discover schools of crappie or bluegill, or even study the bottom topography to try and find nests during peak spawning times.

Best Time To Catch Them

You can catch crappie or bluegill year-round in many parts of the country, especially if the waters stay temperate (as would be the case in many southern states).  Bluegill, in particular, are abundant and easy to catch no matter what season you’re in, whether the sun’s beating down or the pond’s icing over—although crappie ice-fishing isn’t unheard of, either.

There are ideal seasons and times of days to fish for bluegill and crappie. The best time to fish for crappie is when they’re hungry or spawning. Crappie typically feed between midnight and 2 in the morning, and are most abundant between March and May—their usual spawning window.  Bluegill feed most at dawn and dusk and spawn during the summer between late May and August.

When casting, look for covered areas such as vegetation—weeds and shrubs, for example—and fallen trees or rocks, where the water has good clarity. Crappie prefer these areas over open waters whenever possible and won’t often congregate in muddy, cloudy spots due to reduced visibility.

To catch bluegill, cast inshore during feeding hours, then try your luck at deeper spots during the day.  If spawning season is underway, cast in shallow areas near the shore. This is where bluegill often establish their nests.

The main reason crappie and bluegill are so popular in fishing is because they’re generally quite easy to catch. They travel in schools, spawn abundantly, feed frequently, and rarely grow too large to put up much of a fight, so even beginners can land plenty of bluegill or crappie their first time on the water.

Crappie are slightly easier to land than bluegill in some regards, namely because they don’t scare quite as easily. However, bluegill are easy to catch if you understand their behaviors.

For both varieties, try to find areas where the fish have schooled up. Fish finders are handy for this, but you can also spot them yourself in very clear waters.

To fish for crappie or bluegill, you won’t need much gear. For bait, choose worms or insects, or even bait fish like minnows.  For artificial lures, a simple round jig-head works well.

Keep in mind that bluegills have smaller mouths, so you’ll want to use smaller pieces of live bait—a section of a nightcrawler, for example, rather than the entire thing. You might also use smaller hooks for bluegill than you would when fishing for crappie.

In terms of rods and reels, remember that these fish don’t grow particularly large. A light- to medium-weight rod will suffice, as will a spinning reel. Many anglers prefer ultralight rods specifically meant for panfish to reduce fatigue.

A light mono line of about 2 to 6 pounds will work for most crappie and bluegill.  Add a small bobber and some lightweight sinkers, and consider a swivel so your bait or lure can float off the bottom if you’re casting into shallow areas.

How Do They Taste?

When it comes to taste, both crappie and bluegill are favorites at campouts or a fish fry and more. They have sweeter flavor profiles than other freshwater varieties and pleasing textures no matter how they’re cooked.

All in all, bluegill are considered the tastier fish, although lots of people enjoy crappie's milder flavor. The texture is another factor to consider, however—and in that category, bluegills' flakiness and firmer bite beat the soft, sometimes mushy texture of crappie, hands-down.

Since crappie are usually more abundant and larger than bluegill, they can provide far more meat with less time fishing. Bluegill raise the issue of quality versus quantity, however, because that lower weight translates to firmer texture and more concentrated flavor.

Frying is the most common method of preparation for both bluegill and crappie, hence their shared nickname: panfish. You can also bake crappie and bluegill, though—breaded or bare—or even grill your fillets.

If you’re wondering if the bluegill you’ve caught are healthy to eat, the answer is absolutely. Provided the water you’ve fished them from isn’t polluted, bluegill are actually healthier than bottom-feeding varieties like catfish because they eat mostly insects.

Crappie are also safe to eat, although they do contain more fat. Additionally, since they’re so mild in taste, they’re more likely to be fried (which, while delicious, is best consumed in moderation). One pro for crappie is that they have fewer bones than bluegill, so preparation is a little easier.

What is a good eating size crappie?

You can eat almost any size crappie, but the real factor to consider is cleaning. The larger the fish, the easier it is to clean and remove bones—and the more meat you’ll get for your efforts. Most anglers release anything under a pound. You should also check your state’s guidelines to see what size crappie you’re allowed to keep.

What is a good size bluegill to keep?

A bluegill with a length of 6 inches or so will provide enough meat to make the effort of cleaning and cooking worth it. Again, make sure you follow your state's recreational fishing laws to know not just the size of fish you can keep but also the quantity.

While aging fish by weight or length isn’t an exact science, it is a good tool to estimate how old your crappie is. At 15 inches in length, a black crappie would have to be about 15 years old, while a white crappie would be 10 to 11 years old.

Why is crappie not sold in stores?

Crappie caught recreationally are safe to eat, but it is possible they’ve consumed pollutants since the waters are unregulated. In commercial settings, these contaminants can spread during transport and preparation. That risk is far smaller in individual, recreational settings. This doesn’t just apply to crappie, either; many wild fish are prohibited from commercial harvesting and sale for the same reason.

Although crappie and bluegill are not the same, these fish do have a great deal in common that makes them so popular with both new and experienced anglers. Crappie and bluegill are abundant, easy to catch, and taste great. What’s more, because you can find them in nearly any freshwater across the United States, they’re a reliable catch when you’re in the mood to land some dinner—or just have fun on the water.