Tuna is one of the most sought-after fish among anglers, both for the sport of catching it and its tastiness as an eating fish.

While sushi aficionados already know the difference in flavor and texture of bluefin vs yellowfin tuna, distinguishing these two species on the water is another story.

In this article, learn the similarities and differences between bluefin and yellowfin tuna, how to catch both, and which is the best option for sushi and sashimi.

Bluefin belong to the Scombridae family, which includes other tuna species as well as mackerel and bonito species.

Size is one of the greatest differences of bluefin vs. yellowfin tuna since this species can grow to hundreds of pounds. In fact, the largest on record was nearly 1,500 pounds, and the average of about 500 exceeds the yellowfin’s average mass (300-400 pounds).

Perhaps the easiest distinguishing factor for an angler to recognize when identifying their catch, however, is right in this species’ name. Bluefin tuna have dark blue tails, while the tail fin on yellowfin tuna is yellow.

One factor that can make identifying bluefin tuna difficult is that they aren’t devoid of yellow coloring altogether. You’ll often notice yellow or yellowish pectoral fins, and that leads to confusion among some anglers.

Fortunately, this can be another clue that you’ve caught a bluefin vs yellowfin tuna. The pectoral fin on the sides of a bluefin are short and don’t extend past its second dorsal fins, but will on a yellowfin.

The dorsal fin is yet another difference in these species. Bluefin have grayish-yellow second dorsal fins, and yellowfin have bright yellow ones. 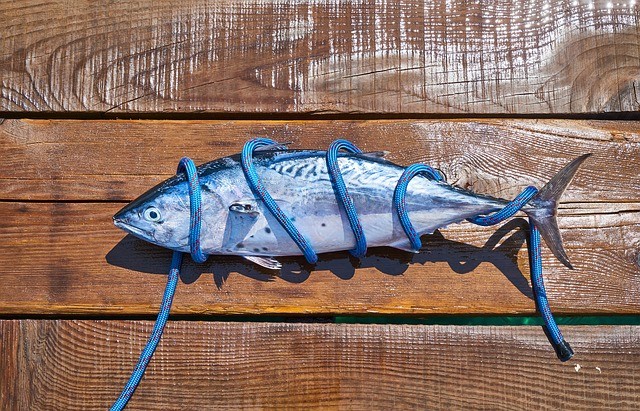 Yellowfin tuna belong to the same tribe and family as bluefin and do look similar in many ways. Their bellies are silver in color, and their head and general body shape are tough to tell apart when you first catch them.

One useful tip, as previously mentioned, is to observe the coloring differences in these species. Yellowfin have more yellow on them than bluefin tuna, most notably in the bright lateral line on their bodies.

Finally, look at the tail. A yellowfin tuna’s tail fin is gray and yellow. Bluefins have dark blue tail fins. 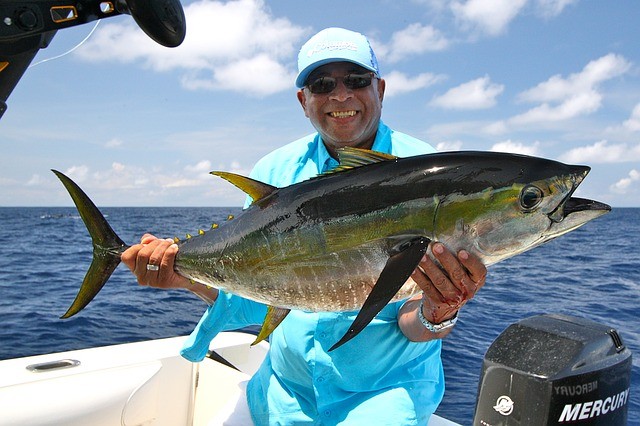 Both bluefin and yellowfin tuna are migratory predators and roam the oceans at different times of the year, depending on the climate.

While most fish are cold-blooded, tuna have a unique circulatory system that allows for adaptability in varying temperatures. Known as countercurrent exchanging, this allows bluefin and yellowfin tuna to maintain their body temperatures and keep them warm, even when surrounding waters are cold.

These species don't have many enemies. Being so large, they're pretty close to the top of the oceanic food chain. Big billfishes, whales, and some sharks are the only animals to eat adult bluefin and yellowfin tuna—along with humans, of course.

Because of this, both species are open-ocean fish, also known as pelagic species. They’re strong, fast, and adaptable, and can venture into water thousands of feet deep, or be spotted right at the water’s surface, depending on the area and season.

Fishing Location - Where Do You Find Them?

Yellowfin are distributed more widely than bluefin tuna. Depending on the species, you can find bluefin tuna in many subtropic or temperate oceans, from Canada all the way to Brazil and across the Atlantic, to the south-most tip of Africa up to Greenland and Norway.

Yellowfin can be found all over, but don't venture into colder waters like bluefin. You won't find them in the Mediterranean or anywhere far north where the water reaches cooler temperatures. They prefer tropical or mild waters and can be fished in both the Atlantic and Pacific.

When To Fish For Tuna (Season To Catch Them)

The best time of year to fish for bluefin and yellowfin depends on the location you choose. Overall, both species can be landed year-round, especially late winter or early spring for bluefin, although other areas see a large amount landed from summer into fall too.

Yellowfin fishing can be done anytime, but in North American waters, you’ll see the most luck in the summer or very early fall when the oceans are still warm. However, tropical locations, which have warm weather in every season, can be fished virtually all year long with success.

Both species are easier to catch in low-light conditions. Before dawn, after dusk, or overnight can yield some huge, impressive catches for both yellowfin and bluefin anglers. Overcast days are great too, although you can also have luck when the sun is shining bright—you’ll just have to fish deeper.

In terms of an angler’s experience level to catch yellowfin or bluefin tuna, both require skill and determination. These species are large and strong, so prepare for quite the fight when you hook one.

Bluefin are harder to catch than yellowfin overall because they tend to hide out in deeper waters. This is especially true when it’s cold. Also, because yellowfin are more widely found in general, catching them is theoretically easier.

Perhaps the most important tip for catching bluefin or yellowfin tuna is to practice patience. Trolling the ocean and waiting for one of these sharp-sighted fish to take the bait isn’t a quick outing, by any means. What’s more, once they’re on your line, it’s going to take a lot of strength to win that fight.

That said, beginner anglers without much experience can certainly land big tuna. It can be helpful to bring someone more experienced along or employ the services of a sport fishing charter boat to guide you through your first big tuna trip.

Which Is Best For Sushi & Sashimi?

Bluefin and yellowfin tuna are both excellent for eating. Due to a higher fat content, firm texture, and rich flavor, you’ll see bluefin used in sashimi quite often. It’s especially prized in Japan.

Yellowfin, which has less fat, possesses a milder flavor that’s sweeter and more delicate. You’ll also find it in sashimi, but it’s not unusual to serve it in various cooked dishes.

Due to availability and price, bluefin is considered more of a delicacy and “high end” kind of fish than yellowfin. While you’ll spot yellowfin on low- to mid-priced sushi menus, bluefin is often reserved for high-dollar offerings.

Bluefin offer different cuts of meat, some with more fat than others or firmer meat. While the flavor is stronger, it’s not an unpleasantly fishy taste—more of a savory and full richness. Its texture has a tenderness to it that the leaner yellowfin sometimes lacks, although the latter isn’t without its charm by any means. In fact, when you order ahi tuna steaks, that’s often what you’re getting: yellowfin.

Both bluefin and yellowfin tuna can be consumed raw, of course, or cooked just a bit to enhance their flavors or make the texture more palatable for some. You typically won’t find these fish battered and fried like other species due to their richness and meaty, steak-like textures, although fried ahi is quite popular in some regions.

Mercury levels are higher in bluefin, partially due to their higher fat contents, making them slightly less nutritious than yellowfin. However, both fish are safe to consume, delicious, and provide low-calorie, high-protein meals with Omega-3s and other nutrients. 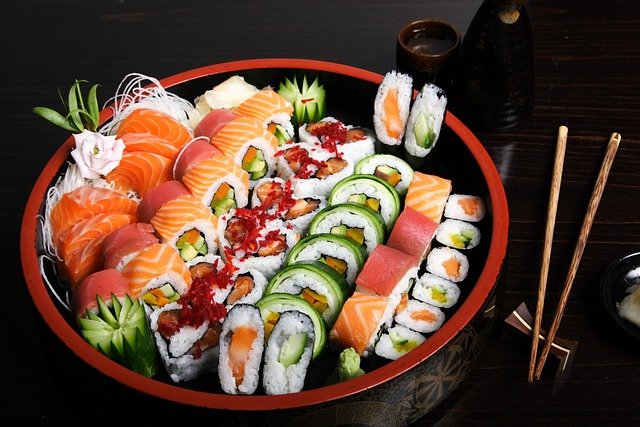 Which is more expensive: bluefin or yellowfin tuna?

Bluefin is more expensive than yellowfin tuna. Part of this is size—bluefin tuna grow to greater weights than yellowfin—but can also be attributed to availability. Yellowfin are more prevalent and widely distributed than bluefin, so the supply better meets the demand.

A bluefin weighing a thousand pounds could fetch thousands in the right market. On average, bluefin costs $200 a pound, although the quality of the catch can raise that price even higher. The most expensive bluefin purchased was a 600-pounder, which a restaurant in Tokyo bought for $3 million.

Why is bluefin tuna so expensive?

Bluefin is expensive largely due to its size and the quality of its meat, and the economic concept of supply vs. demand. Because bluefin has such a delicious taste and texture—along with other key features of great meat such as marbling—it’s been overfished in some areas.

As the population (or supply) decreases, prices rise to compensate for steady or increasing demand. Consider the tuna you buy in cans at your grocery store: it's much cheaper because it comes from a more prevalent species that is easier to catch—usually albacore.

Can I eat tuna every day and lose weight?

Many diet and health experts recommend increasing your fish intake as part of a low-calorie, high-protein diet conducive to weight loss.

While tuna is a great option in moderation, consuming too much can be harmful to your health and lead to mercury poisoning. This illness can cause vision or memory issues in mild cases, and lead to seizures or severe pain in extreme ones.

Tuna can safely be consumed 2 to 3 times a week, although getting these servings from a variety of fish is better.

What is the biggest bluefin tuna ever caught?

The largest bluefin on record is the 1,496-pound tuna landed by Ken Fraser. Fraser caught the bluefin near Nova Scotia in 1979.

Both bluefin and yellowfin tuna are popular target fish for anglers. Their large size and impressive strength make for great sport when catching—and their full tastes and meaty textures make for great eating.

While both are used in sashimi and other delicacies, bluefin is rarer, larger, and more expensive.