Most of the time, an unproductive day on the shore is due to one of the following reasons- the timing or the place you picked to surf fish. Luckily for you, we’ve got a great guide to steer you to success.

You’ll find out more about when to surf fish and the possible places around the states to better your chances. Reeling in 30-40 pound striped bass won't be such an unrealistic dream with our surf fishing tips.

Considerations Before a Surf Fishing Session

If you’re a beast in ponds and streams, that’s great! But, surf fishing is a different experience altogether, so you'll need to consider a new set of additional equipment. As a beginner, consider a surf rod that’s between 9-12 feet long, and if you’re more experienced with surf fishing, then a 12-15 foot will be best suited to you.

As surf fishing requires a heavier line than typical environments, we advise a monofilament or, better yet, a fluorocarbon line with a minimum of 20-25 lbs line rating. Fluorocarbon is stronger, lighter, and it has a little more flex when under pressure, but monofilament can work, too.

Pair this line and rod with a shock leader and a bait of your reference, and you’re almost set! Next, it’s time to consider the time of day, the beach, the weather, and more importantly, the tides. These are all considerations we’ve elaborated on further below. 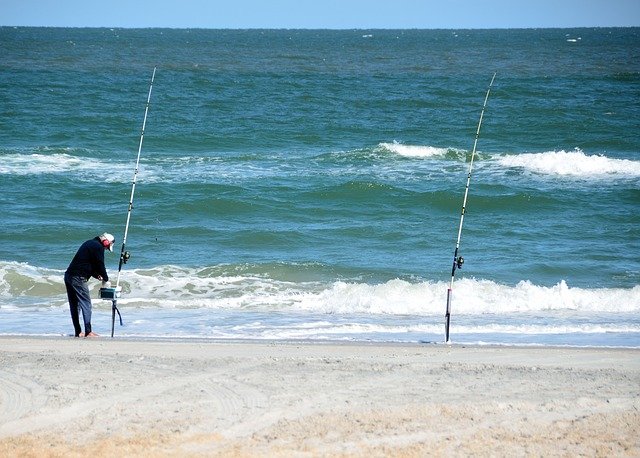 When to Surf Fish

The tides you cast into will seriously determine the type of fish you catch simply from the water's movement. The to and fro movement has a stronger impact in shallow waterways as opposed to deep-sea fishing, so it’s more important to consider this when casting from a beach.

With a minimal current (also known as a low tide), baitfish will come closer to shorelines to feed off small organisms. This, in return, lures larger gamefish in as the smaller fish can’t use the current to escape its predator species.

High tides have a lot more water movement and provide more food and other organisms into the water by pulling them from the sea bed. These tides can also spread the schools of fish further apart, making it harder to get a catch.

If you’re fishing in areas with lots of structure, weeds, or debris, it can make things quite tricky for you. We recommend surf fishing during a falling tide. This is right after a high tide begins to slow down, and it’s typically two hours before the low tide is back in place.

One of the most critical elements when surf fishing comes down to the weather. We’d all love to stand out by the water on a clear, sunny day, but it's not the most effective way to get the most bites.

Fish are vigilant creatures who steer clear of threats, so if there isn’t much cover, there’s less of a chance for species to be close to shore.

For this reason, they tend to feel more inclined to stay near the shore for feeding when there is sufficient coverage within the surf zone. So, Rainy, cloudy, and windy weather creates these conditions in different ways.

Best Time of the Day

Most surf anglers prefer fishing in the early hours of the morning or just before sunset. As we mentioned, fishing 2-3 hours before and after high tide is the best, and this typically happens early in the morning or in the late afternoon.

You can surf fish at night, too, as there’s a better chance to catch bigger fish as they come closer to the shore to feed during the night. Night fishing can be extremely dangerous, especially if you want to wade in the water, so we don’t recommend going at it alone, especially for your first few times.

The best season to surf fish is in spring and fall. We always find spring to be best as the sun and the moon are on the same side of the earth and create spring tides.

During this time, tides rise and fall higher and lower than during the first or last quarter of the year, making it easier for fish to feed. You can, of course, surf fish in the summer and winter months, but many species typically go further out at sea due to the water's temperature.

Most fish species that you can catch from shore (like bluefish, strippers, red snapper, summer flounder, and snook species) prefer a water temperature from 61 °F to 75 °F. So we recommend checking the watch forecast in your area before heading to shore.

An atmospheric/barometric pressure measures the force of the air's weight over a particular area of water. When it’s hot, cloudless, and sunny, the pressure of air is shown higher. Whereas low air pressure is usually associated with winds, rain, and murky skies. Measuring the barometric pressure and watching the weather forecast will certainly help you to find hungry fish.

The normal range of atmospheric pressure is between 29.85 and 30.00 in Hg. If the air pressure drops below average, the fish's bladder will pick this up, and they’ll begin to feel uncomfortable. They then move to deeper waters in search of a higher atmospheric pressure leaving you with no fish to catch.

The best time to surf fish is when the atmospheric pressure is slowly falling and not already low. The drop in the barometer implies bad weather is coming (like a storm, for example), so fish will eat more out of fear of starvation.

Surf fishing is undeniably at its peak in the summer months in California, and there are many fishing spots to choose from. During this peak season, you can catch California corbinas, yellowfin croakers, leopard sharks, and more. Some species are caught along the coastlines year-round. These include California halibut, bat rays, and barred surfperch.

In Florida, it’s best to hit the shores late into the summer months and early into fall. This is when the water temperature is at its best for spawning and feeding. All public beaches allow fishing from the shore as long as you have an appropriate fishing license. Some of the most common catches are snook, pompano, shark, snapper, and redfish.

Set up your surfcasting gear on Sandy Hooks beach and fish into the Atlantic. Or, you can cast into Barnegat Bay’s undeveloped barrier beach. There are over 140 miles of shorelines for you to choose the best spot for you, and you can surf fish here all year round. Expect to find a lot of largemouth bass on the coastline of this state, and some kingfish, too.

Cape Point is one of the most loved surf fishing destinations on the Outer Banks of North Carolina. During Fall, its peak season, you can catch species such as sea mullets, trouts, mackerels, and bluefish. This popular destination can fill up fast with hopeful anglers looking to surf fish, especially in September. 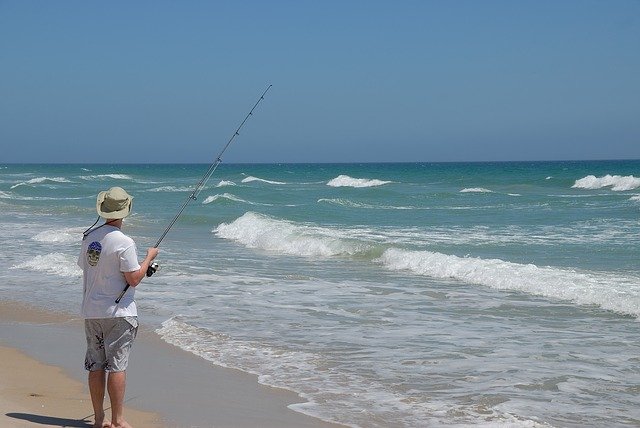 What types of fish are commonly caught when surf fishing?

This depends on the area you’re fishing in. If you’re setting up on the mid-Atlantic US coastline from New York to the Carolinas, then it's likely to reel in a game fish that's 20-40 lbs in weight. Some of the most common species you can catch are redfish, flounder, mackerel, snook, and tarpon.

What are the possible catches when the water is too cold?

Some of the most active species in cold waterways are surfperch, blackfish, mackerel, and porgy. These species can live and feed in waterways as low as 40 degrees Fahrenheit.

What are the possible catches when the water is too warm?

If the water hits as high as 100 degrees Fahrenheit, the only bite you might get is from a tarpon. Snooks, pompanos, and bluefish can withstand shorelines up to 85 degrees before searching deeper, cooler water.

When is the best time to catch pompano from the surf?

April, May, and November are good months to catch pompano as they typically like water temps between 65 and 85 degrees. The most preferred temperature is between 65-70 degrees, so check your weather forecast and get surf fishing.

Can I catch fish in rough surf?

Of course! As we mentioned earlier, choppy surf conditions provide a lot of coverage, so fish tend to feed closer to the shoreline. It’s not the safest time to surf fish, so it’s wise to give someone your location or to bring a friend in case the tides quickly change for the worst.

Can I catch fish in heavy rain?

Yes, as there’s a lot of cover from the clouds, and the ripples of the rain, making it safer and more comfortable for fish to feed near the shore in the rain. It can be just as prolific and a lot safer to surf fish hours before and after a rainstorm if you read the barometric pressure of the water instead.

Putting some thought into your gear, location, and time of year will make your surf fishing trip a success. You might even find yourself landing some hefty catches straight off the bat if you use our tips, and visit our recommended spots. Either way, have fun, stay safe, and enjoy your surf fishing trip on one of our beautiful beaches here in the US.